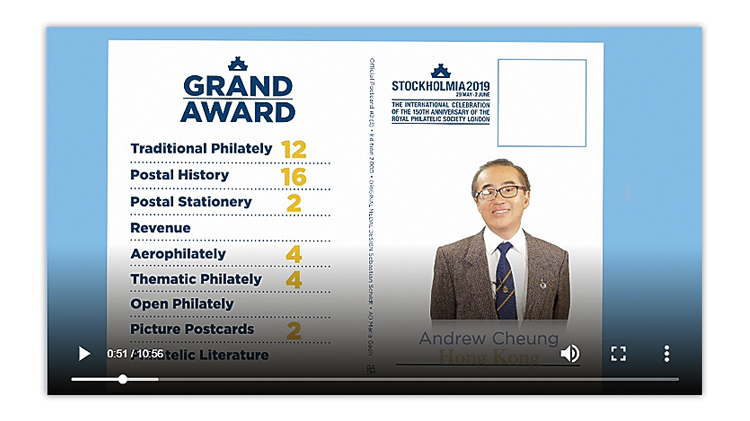 The Stockholmia 2019 international stamp show and exhibition, held May 29-June 2, was surely one to remember.

When it came to the exhibit awards, Americans were represented well. Daniel Ryterband’s exhibit “A Country Divided: Effects of the American Civil War on the Mails” won the grand award, and Gordon Eubanks received the traditional philately best in class award for “First Federally Issued Postage Stamp of the United States.”

Approximately 800 people attended the awards ceremony in the Vasa Museum, Sweden’s top-rated museum. There were many highlights from the evening, but what was most different was the presentation of the best in class awards by video.

Each of the nine competitive classes of exhibits was described, the winner in each class revealed and then the video showed the actual exhibit in the frames (the book for the literature class).

Even more surprising was the video announcing the grand award winner; it included a short clip of each judge saying how he or she voted. The level of openness in voting was impressive and, to my knowledge, unprecedented.

I recommend watching the videos online. You can find the link to the video of the exhibit classes by scrolling down through the news feed and locating the report dated June 2 about the Stockholmia winners presentation. The link to the live voting by judges video is on the right side of the page under “Stockholmia 2019 Winners Grand Award.”

Congratulations to the Stockholmia organizing committee. I’m certain other show organizers will be inspired by many of the events when planning their own shows.