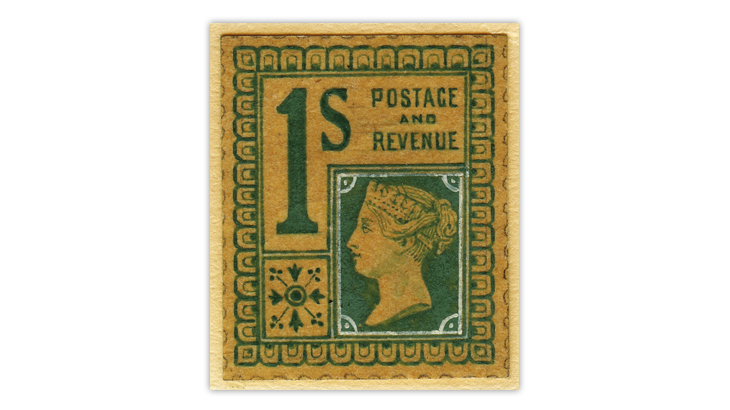 In Great Britain Philately in the June 29 issue of Linn’s Stamp News, Matthew Healey explores the development of essays that were created for the 1887-92 Victorian Jubilee series. The pictured essay shows a proposed design by G.R. Smith for the 1-shilling

The June 29 issue of Linn’s Stamp News just landed on the presses and goes in the mail to subscribers Monday, June 15. And if you subscribe to Linn’s digital edition, you’re at the head of the line with early access Saturday, June 13. While you wait for your issue to arrive in your mailbox, enjoy these three capsule summaries of exclusive content available only to subscribers.

Essays for the 1887-92 Victorian Jubilee series

“Among the most elusive and desirable items in Victorian philately are the hand-painted essays for the Jubilee issue of 1887-92. These exquisite, one-of-a-kind miniature works of art reveal how one of the most popular series of British stamps came to be,” writes Matthew Healey in Great Britain Philately. In the mid-1970s a group of 113 hand-painted essays showing the gradual progression of the Jubilee designs became available to collectors. Fortunately, renowned dealer Robson Lowe documented the essays in a detailed article published in 1975 in the Philatelic Journal of Great Britain. Be sure to join Healey on this most fascinating philatelic exploration.

In their tip of the week, Stamp Market Tips columnists Henry Gitner and Rick Miller tout the black 7¢ stamp featuring President William McKinley and perforated gauge 10. The design is identical to that of 1923 7¢ black stamp with gauge-11 perforations. “McKinley had appeared earlier on the Louisiana Purchase Exposition 5¢ blue stamp (Scott 326), the Fourth Bureau Issue stamps in black were in the nature of mourning issues for the martyred president,” write Gitner and Miller. They conclude by mentioning percentages of Scott catalog value that make the stamp a “good buy.” You’ll have to read the column to learn what they are.

In each weekly issue of Linn’s, either E. Rawolik VI or E. Rawolik VII dissects the contents of a stamp mixture offered to collectors. E. Rawolik is a pseudonym that is also the word “kiloware” (a stamp mixture) spelled backward. This week, E. Rawolik VI looks over a worldwide assortment that served up what Rawolik describes as “many se-tenant pairs, strips of five, and panes of six to 10 stamps.” Also included with the mixture was a free bonus packet of stamps, which was not included in the review. Rawolik also notes that 23 of the 48 1999 Millennium series stamps from Great Britain were found in the assortment. Read the whole column to learn which stamps had the highest catalog value.