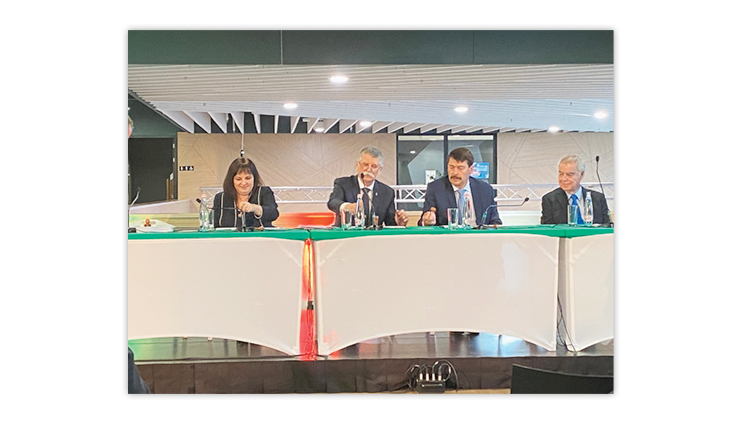 In the May 30 issue of Linn’s Stamp News, Chris Lazaroff shares highlights from his visit to Hunfilex 2022, the international exhibition held March 31-April 3 in Budapest, Hungary.

The May 30 issue of Linn’s Stamp News just landed on the presses and goes in the mail to subscribers Monday, May 16. And if you subscribe to Linn’s digital edition, you’re at the head of the line with early access Saturday, May 14. While you wait for your issue to arrive in your mailbox, enjoy these three quick glimpses of exclusive content available only to subscribers.

A look back at Hunfilex 2022 in Budapest, Hungary

“After attending the Notos 2021 European philatelic exhibition last November in Athens, Greece, I was looking for another international show to attend. Hunfilex 2022 in Budapest, Hungary, caught my eye, and I made the plans to attend,” writes Chris Lazaroff in an entertaining account of his time at the international exhibition held March 31-April 3. Among the highlights was a first-day ceremony on the show’s opening day for a souvenir sheet celebrating the centennial of organized philately in Hungary. Lazaroff also draws attention to the special exhibit hosted by Hungary’s national postal museum. Among the rarities on display were “stamps and covers from the early period of the country, errors in printing, and proofs of a stamp that was never issued,” according to Lazaroff. Enjoy his entire review of the show in this issue.

Plating Swiss stamps: how good are your eyes?

To introduce readers to the basics of plating, Swiss Stamp Scene columnist Richard T. Hall focuses on the first commemorative issue of Switzerland, the 1900 Universal Postal Union issue (Scott 98-103). “This is an interesting issue even if the possibility of plating it is set aside,” Hall explains. He first notes that two plates were produced for each domination. Stamps printed from the first plate have line perforations, and stamps printed from the second plate are comb perforated. To tell the two perforation types apart, you look at the corners of the stamp. “The vertical and horizontal perforations intersect exactly on comb-perforated stamps, while on line-perforated stamps they don’t,” writes Hall. Hall also looks at a famous printing variety on the 1941 10-centime stamp honoring the 750th anniversary of the founding of Bern (Scott 288). Read the column to learn the variety’s artful name and how to spot it.

Rockets launched from planes for missions into space

In his Exploring Astrophilately column, Charles J. Vukotich Jr. serves up an engaging look at “the use of rockets launched from aircraft for suborbital and orbital missions.” He begins with a review of important milestones that made the flights discussed in the column possible. One of these signature events occurred on Oct. 14, 1947, when Chuck Yeager flew a Bell X-1 rocket plane faster than the speed of sound for the first time. Vukotich uses a colorful selection of six covers to tell the story of air-launched rocket flights that began in earnest in 2004 with SpaceShipOne, a rocket-powered plane that won the $10 million Ansari X Prize for the first reusable aircraft to fly into space two times within 14 days and return safely to Earth. The other achievements Vukotich documents are equally riveting and not to be missed.