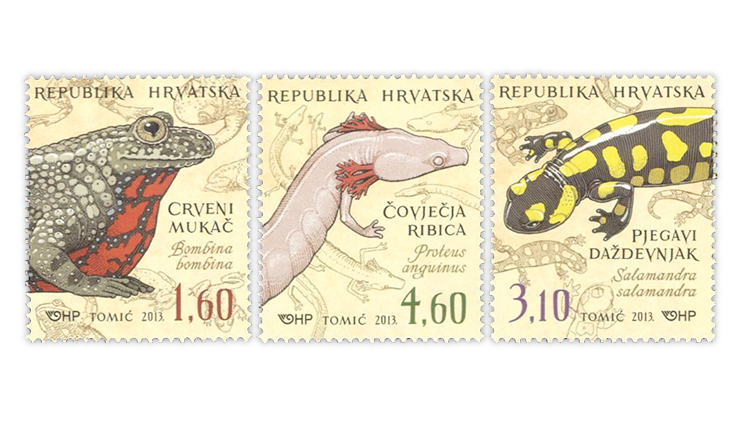 In Stamps of Eastern Europe in the May 23 issue of Linn’s Stamp News, Rick Miller discusses some of the fascinating wildlife that appear on stamps of Croatia. These three stamps issued in 2013 picture three amphibians, a toad and two salamanders.

The May 23 issue of Linn’s Stamp News just landed on the presses and goes in the mail to subscribers Monday, May 9. And if you subscribe to Linn’s digital edition, you’re at the head of the line with early access Saturday, May 7. While you wait for your issue to arrive in your mailbox, enjoy these three quick glimpses of exclusive content available only to subscribers.

A range of wildlife can be spotted on Croatian stamps

Croatia, which is located on the Baltic Peninsula along the Adriatic Sea, “is home to a wide range of diverse animal life, which can be seen on its stamps,” writes Rick Miller in Stamps of Eastern Europe. Miller begins his exploration of some of these amazing creatures with the trio of 2013 stamps illustrated here that picture amphibians, specifically a toad and two salamanders. The fire salamander on the 3.10-kuna stamp has a distinctive pattern of bright yellow spots and strips that serve as “an honest warning to predators because this salamander is toxic to all vertebrates,” according to Miller. Other stamps are devoted to the meadow viper, the griffon vulture and the Adriatic sturgeon. Also featured is a stamp picturing the world’s rarest pinniped. Read the column to learn the identity of this endangered species.

Fads and trends in first-day covers

Lloyd de Vries opens his First-Day Covers column with a review of some of the criticisms of the so-called grace periods extended to collectors for servicing FDCs. He refutes the belief held by some that grace periods have adversely affected the value of FDCs and are the cause of a substantial decline in FDC collecting. De Vries sees grace periods as advantageous to FDC servicers because they “could affix stamps the way they wanted them — plate blocks, combinations with other stamps and so on — without being present at the first-day city, having an agent at that city on that date, or praying.” He reminds collectors who desire a first-day cover canceled on the official first day to buy only those FDCs bearing a registry or double-outline circular datestamp. There’s much more to learn, so be sure to read to the end.

In each weekly issue of Linn’s, either E. Rawolik VI or E. Rawolik VII dissects the contents of a stamp mixture offered to collectors. E. Rawolik is a pseudonym that is also the word “kiloware” (a stamp mixture) spelled backward. This week, E. Rawolik VII sifts through a random sample plucked from a packet of 310 worldwide stamps. The reviewed sample of 78 stamps included stamps from 32 countries with issue dates from 1903 to 1996. Coming out on top was Germany, with 11 stamps. A few stamps caught our reviewer’s attention, including a 1980 North Korean issue that shows two famous chess players competing at the 1972 World Chess Championship. Enjoy the full review in this issue.