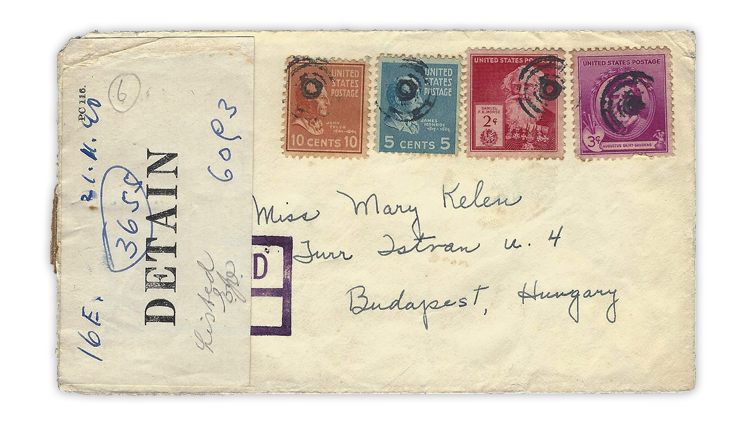 In Spotlight on Philately in the April 18 issue of Linn’s Stamp News, Ken Lawrence discusses some of the methods Allied postal administrations used to censor mail sent by collectors during World War II. The cover pictured here, sent from California to Axi

The April 18 monthly issue of Linn’s Stamp News just landed on the presses and goes in the mail to subscribers Monday, March 28. And if you subscribe to Linn’s digital edition, you’re at the head of the line with early access Saturday, March 26. While you wait for your issue to arrive in your mailbox, enjoy these three quick glimpses of exclusive content available only to subscribers.

In his Spotlight on Philately column, Ken Lawrence writes: “During World War II in the United States, all international communications were subject to censorship, and all international commerce was subject to regulation. Those restraints applied to stamp hobby sales and trades just as they did to more important publishers and distributors of information and to more essential businesses.” Lawrence uses seven covers to document how philatelic mail came under scrutiny during the war. Some of them are inbound or outbound covers examined by U.S. philatelic censors, while the others were detained by British censors. The 1940 cover shown here was intercepted by the British Imperial Censorship station at Bermuda.

Matthew Healey, in Great Britain Philately, reviews the historic impact of British stamp designer David Gentleman and his wife, Rosalind Dease, who has received much less attention to this point. “Though he is known as a consummate freelancer who worked alone for most of his career, Gentleman shared credit with Dease on three British issues, a total of 11 stamps, during 1965 alone,” Healey explains. He provides useful biographical summaries of Gentleman and Dease’s philatelic accomplishments. One of the most important achievements, Healey argues, was the creation of the so-called Gentleman Album: “In 1965, Gentleman submitted an album of experimental designs to the committee reviewing stamp proposals. The essays, which were the work of Gentleman and Dease, would have an extraordinary and lasting impact on British philately.” There’s much more to learn about this incredible husband-and-wife team, and Healey has the details.

Much to do at London 2022 international stamp exhibition

Armagan Ozdinc, in a special report this month, takes readers inside London 2022, the splashy international stamp show held Feb. 19-26 at the Business Design Centre in Islington, London, England. The exhibition opened one day after a major storm pummeled the United Kingdom with intense wind and copious amounts of rain. “By the time the exhibition opened on Saturday, the weather had calmed, the booths were set up, the frames of exhibits had been assembled, and the philatelic celebrations could begin,” Ozdinc writes. Lingering COVID-19 concerns kept attendance low, and a number of dealers from continental Europe remained at home because of “Brexit-related restrictions,” according to Ozdinc. A highlight for Ozdinc was hosting Liv Slania, the daughter of renowned stamp engraver Czeslaw Slania, as his guest at the Faroe Islands Posta booth. Read the rest of his report for details about the top exhibit awards.