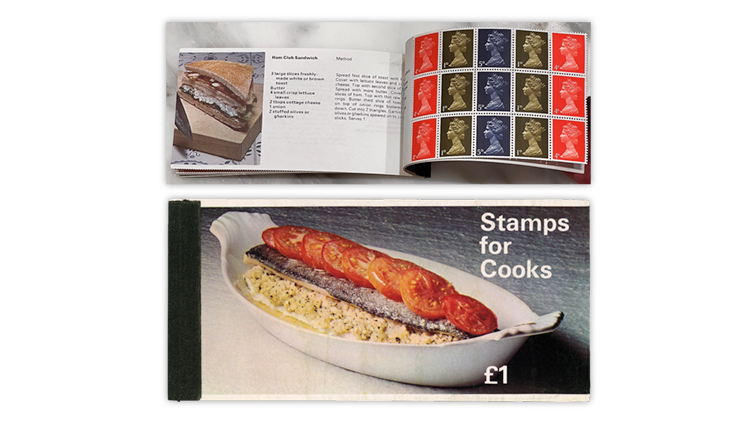 The Dec. 19 issue of Linn’s Stamp News just landed on the presses and goes in the mail to subscribers Monday, Dec. 5. And if you subscribe to Linn’s digital edition, you’re at the head of the line with early access Saturday, Dec. 3. While you wait for your issue to arrive in your mailbox, enjoy these three quick glimpses of exclusive content available only to subscribers.

In Great Britain Philately, Matthew Healey looks for the silver lining among British stamps devoted to British food. He opens his culinary review, thus: “Traditional British cooking, with few exceptions, is a wasteland of cold meat pies, root vegetables, mushy peas and questionable delicacies such as haggis. The cheeses are all right, and some of the sweets are delightful.” But don’t let that lukewarm introduction prevent you from digging into the philatelic feast that Healey presents in the rest of the column. Subject that come up at various points include the song Good King Wenceslas, Father Christmas, the Domesday Book and Charles Dickens’ Oliver Twist. Come along for the tour. You won’t be disappointed.

The unveiling of the U.S. 1994 World Cup souvenir sheet

Joe Brockert, in Philatelic Backstory, recounts the fascinating story behind the first appearance of the design of the United States 1994 World Cup souvenir sheet in the U.S. Postal Service’s Stamps Etc. mail-order catalog. “I was so proud,” he recalls. “As creator and founding editor of Stamps Etc. two years earlier — as well as the USA Philatelic catalog that would follow as its replacement two years later — my editor-journalist instincts were always looking for a good exclusive opportunity.” But that opportunity would prove a challenge because of staff shortages and other factors associated with the souvenir sheet, which was rushed to press with “no on-site press approval by any staff or contractor associated with its design,” Brockert writes. Be sure to read on for all the controversial details.

Trans-Pacific Clippers on the eve of Pearl Harbor

In Spotlight on Philately, Ken Lawrence provides a detailed exploration of covers that were carried aboard six Pan American Airways flying boats (known as Clippers) during their journeys across the Pacific Ocean in November and December 1941. As Lawrence explains, the column is adapted from a presentation that he gave during the Aerophilately 2022 show held Nov. 4-6 at the American Philatelic Center in Bellefonte, Pa. Lawrence drew upon previous postal historians’ work and archival material that was unavailable to earlier philatelic researchers to produce a comprehensive account that World War II aerophilatelists will turn to time and again.