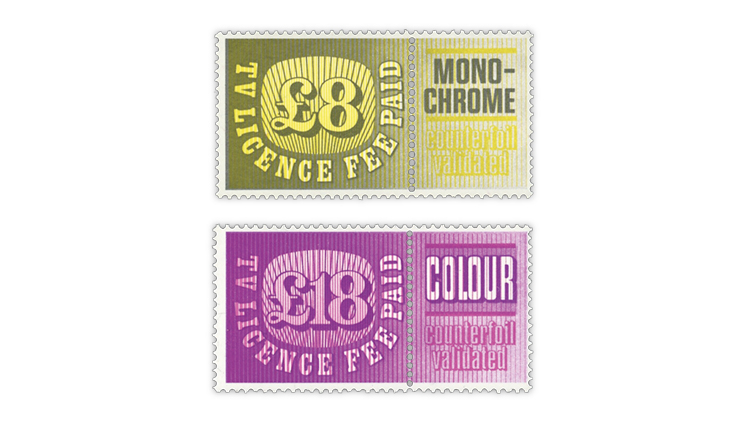 In the Jan. 16 issue of Linn’s Stamp News, Great Britain Philately columnist Matthew Healey explores British television license fee stamps, which were in use from 1972 to 1997.

The Jan. 16 issue of Linn’s Stamp News just landed on the presses and goes in the mail to subscribers Monday, Jan. 2. And if you subscribe to Linn’s digital edition, you’re at the head of the line with early access Saturday, Dec. 31. While you wait for your issue to arrive in your mailbox, enjoy these three quick glimpses of exclusive content available only to subscribers.

From 1972 to 1997, owners of television sets in the United Kingdom paid the mandatory annual license fee with adhesive stamps sold at post offices. The fee depended on whether the TV was black-and-white or color. In Great Britain Philately, Matthew Healey traces the origins and uses of these fascinating stamps. “In Britain, since the 1920s, there’s been … a tax on radio and television ownership, the proceeds of which fund the British Broadcasting Corporation, or BBC.,” Healey writes. “This annual tax, dubbed a license fee, was collected for several years (from 1972 to 1997) by means of adhesive stamps attached to a license form.” The two television license fee stamps pictured above were issued April 1, 1975. Healey also touches upon some of what he calls Orwellian features of the TV tax, to include the use of vans marked “Television Detector” that drove around neighborhoods picking up home TV receiver signals. Today some of these stamps are quite scarce. Healey explains why, so be sure to read the entire column.

The Spitzbergen tourist stamps of Norway

More than a century ago, a number of shipping lines offered trips to Spitzbergen in the Arctic region and sold stamps to the tourists. As Christer Brunström explains in Nordic Stamp Scene, such travel was considered a luxury at the time. The tourist stamps came about to meet the needs of travelers who enjoyed “sending letters and postcards to friends and relatives back home telling them about their adventures,” Brunström explains. A bookseller and stamp dealer named Waldemar Birger Bogh established a number of privately run local posts in small towns in northern Norway. According to Brunström, “the main reason for the establishment of these local posts was the wish to have local postage stamps to sell both to collectors and tourists. All the stamps are still rather common in mint condition but decidedly scarce postally used.” He illustrates 15 tourist stamps, all of which have interesting stories to tell.

A postal salute to the U.S. Naval Academy

In a fascinating and amply illustrated feature article, Martin H. Joyce III introduces readers to United States stamps honoring the U.S. Naval Academy in Annapolis, Md., and some of the academy’s well-known graduates. Joyce begins with a first-day cover of the 4¢ Army and Navy series stamp honoring naval heroes of the Spanish-American War. The stamp shows George Dewey (U.S. Naval Academy class of 1858), William T. Sampson (class of 1861) and Winfield Scott Schley (class of 1860). This marked the first time that Naval Academy graduates were depicted on a U.S. postage stamp. Be sure to join Joyce for the rest of his philatelic guided tour — you won’t be disappointed.