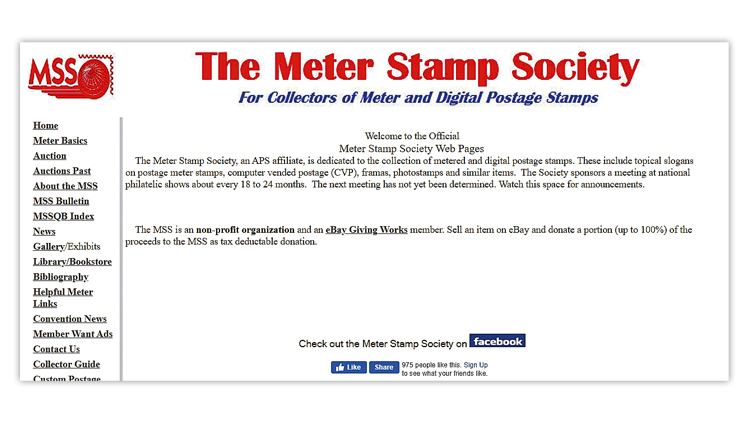 In Computers and Stamps in the July 6 issue of Linn’s Stamp News, William F. Sharpe introduces readers to the fascinating world of meter stamps. Shown is the homepage of the Meter Stamp Society’s website.

The July 6 issue of Linn’s Stamp News just landed on the presses and goes in the mail to subscribers Monday, June 22. And if you subscribe to Linn’s digital edition, you’re at the head of the line with early access Saturday, June 20. While you wait for your issue to arrive in your mailbox, enjoy these three capsule summaries of exclusive content available only to subscribers.

“A meter stamp is the impression made by a postage meter machine that indicates that postage has been paid on a letter or parcel,” writes William F. Sharpe in Computers and Stamps. Sharpe provides some context by mentioning that the first known meter stamp appeared in 1897; widespread use did begin until the early 1930s. Of the sources about meter stamps available to collectors, Sharpe places emphasis on the website of Meter Stamp Society, which offers numerous resources, including a “Meter Basics” tutorial and a collector’s guide that may viewed or downloaded. Another source that Sharpe spotlights is the American Topical Association, which has published dozens of articles about meter stamps in the association’s journal, Topical Time.

In Dollar-Sign Stamps, Charles Snee first looks at the relative ease of finding United States Express Mail stamps used on the U.S. Postal Service’s flat-rate envelope produced for the service. Decidedly more difficult to locate are heavy Express Mail packages that require significant amounts of postage. As Snee explains, “The stamps affixed to them invariably suffer damage on their journey.” Moreover, such items, which are typically cut from larger boxes or parcel wrappers, are often to cumbersome to store in an album or show in an exhibit. Snee pictures one Express Mail heavyweight franked with almost $90 in postage that he calls “a handsome exception.” Read the column to learn why.

In each weekly issue of Linn’s, either E. Rawolik VI or E. Rawolik VII dissects the contents of a stamp mixture offered to collectors. E. Rawolik is a pseudonym that is also the word “kiloware” (a stamp mixture) spelled backward. This week, E. Rawolik VII finds much to celebrate in a sample of stamps from 22 countries that was selected from a worldwide assortment. The advertiser promised stamps with a catalog value of 50¢ or more, and that was what Rawolik received. Among the more exotic issues in the sample were nine stamps from Niuafo’ou picturing butterflies. Niuafo’ou is the northernmost of the 169 islands that comprise the Kingdom of Tonga. Rawolik was also very pleased with the total catalog value, which exceeded $150.