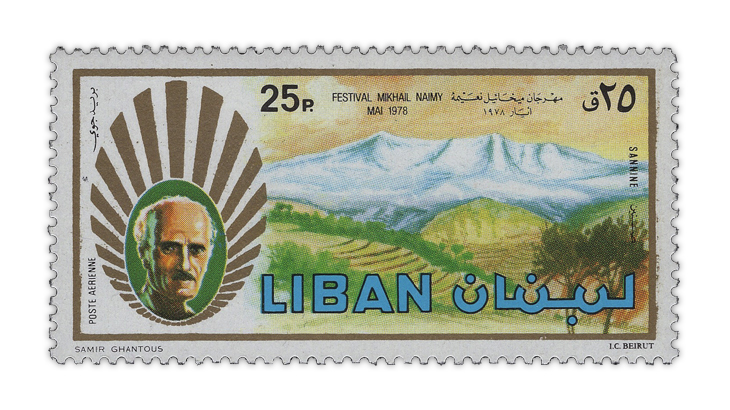 In 1978, Lebanon issued a set of three airmail stamps to honor the festival celebrating the life and works of spiritual writer Mikhail Naimy. Ghassan Riachi has the details in Middle East Stamps.

The Aug. 23 issue of Linn’s Stamp News just landed on the presses and goes in the mail to subscribers Monday, Aug. 9. And if you subscribe to Linn’s digital edition, you’re at the head of the line with early access Saturday, Aug. 7. While you wait for your issue to arrive in your mailbox, enjoy these three quick glimpses of exclusive content available only to subscribers.

Mikhail Naimy “is considered to be one of the most significant writers in modern Arabic literature and one of the most prominent spiritual writers of the 20th century,” writes Ghassan Riachi in his Middle East Stamps column. On May 17, 1978, Lebanon issued a set of three airmail stamps to commemorate the festival held in Naimy’s honor. Riachi provides a brief biography of Naimy, who published works in Russian, English and Arabic. Naimy’s most famous spiritual book is The Book of Mirdad. He then reviews the stamps in detail. Each stamp’s design is meticulously described, along with brief descriptions of the locations shown on the stamps. He also provides helpful tips for collecting the stamps and their postal history. Read the entire column for more insights about these attractive stamps.

Rick Miller, in Stamps of Eastern Europe, takes an in-depth look at stamps honoring the men who served as president of the Baltic states (Estonia, Latvia and Lithuania) between World War I and World War II. Miller sets the stage with a colorful cacheted Lithuanian event cover from 1990. The cachet recognizes Lithuania’s two independence days: Feb. 16, 1918, and March 11, 1990. During the interwar years, Lithuania had three presidents: Antanas Smetona, Aleksandras Stulginskis and Kazys Grinius. Miller pictures stamps honoring all three men; some were issued while they were living, and others were issued after they died. He also reviews key events in the tumultuous lives of Smetona, Stulginskis and Grinius. Miller’s review of the interwar presidents of Latvia and Estonia (and the stamps honoring them) is just as fascinating.

Not all first-day covers are created using standard white envelopes, as Lloyd de Vries explains in his First-Day Covers column. He begins with a look at Joseph M. Sanford, who has produced hundreds of FDCs using wallpaper. Sanford has also created FDCs using paper bags, hamburger wrappers and, most exotic of all, 3½-inch floppy diskettes. One of the more eye-catching FDCs de Vries pictures is one for the United States 2000 10¢ Joseph “Vinegar Joe” Stilwell stamp. Perhaps you already guessed that this Stilwell FDC is a vinegar bottle. Dig into the column to learn about two other creative FDCs, one of which is the brainchild of Linn’s editor-in-chief Jay Bigalke.