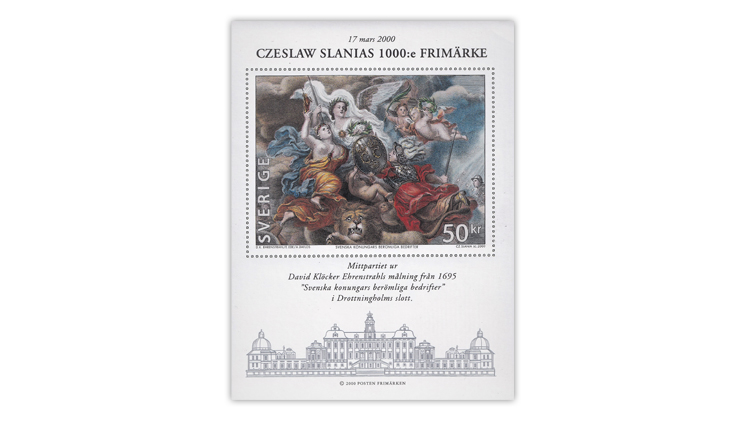 The Oct. 18 monthly issue of Linn’s Stamp News just landed on the presses and goes in the mail to subscribers Monday, Oct. 4. And if you subscribe to Linn’s digital edition, you’re at the head of the line with early access Saturday, Oct. 2. While you wait for your issue to arrive in your mailbox, enjoy these three quick glimpses of exclusive content available only to subscribers.

“When one thinks about engraved postage stamps and asks the question of who the most productive stamp engraver of all times is, the first person who comes to mind is Czeslaw Slania, a distinguished Polish artist who was born in this month 100 years ago,” writes Armagan Ozdinc in a special feature article about Slania’s remarkable life and prodigious philatelic output. Slania designed and/or engraved 1,080 unique motifs that appeared on a total of 1,547 stamps issued by 32 postal administrations. Of these unique motifs, 1,047 were hand engraved by him on a steel plate and printed in intaglio. Although known primarily for the stamps he engraved, Slania also engraved 42 banknote designs for 10 countries. He also engraved, printed and perforated a series of labels picturing world heavyweight boxing champions.

In Philately of France, Larry Rosenblum showcases the beautifully engraved stamps from France that picture works of art. The Art series, which began in 1961, has benefited from advances in intaglio printing technology. As Rosenblum explains, “The enabler of the series was a new press that produced stamps by a process known as TD6. TD stands for ‘taille douce,’ the French term for engraving, and the six indicates the maximum number of colors that can be printed.” Rosenblum provides a useful primer on the TD6 process (which requires the engraver to make two dies, each of which can print up to three colors) before taking readers on an engaging guided tour of the Art series. If you enjoy the intricacies of engraving and stamps with great eye appeal, be sure to read the entire column.