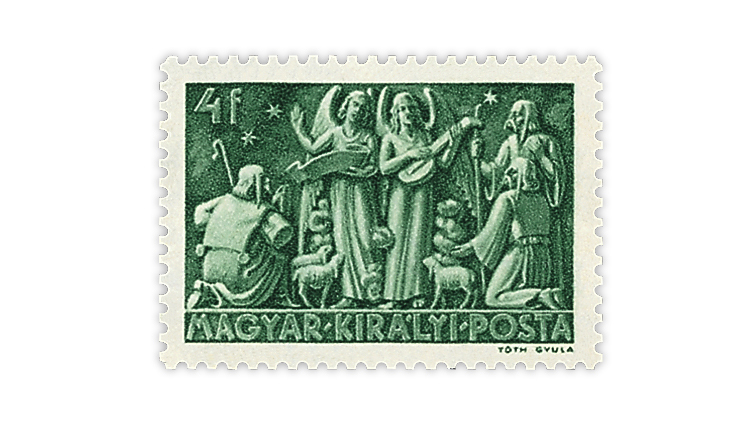 In the Dec. 5 issue of Linn’s Stamp News, Computers and Stamps columnist William F. Sharpe reviews websites and other sources that can assist you with building a collection of Christmas stamps.

The Dec. 5 issue of Linn’s Stamp News just landed on the presses and goes in the mail to subscribers Monday, Nov. 21. And if you subscribe to Linn’s digital edition, you’re at the head of the line with early access Saturday, Nov. 19. While you wait for your issue to arrive in your mailbox, enjoy these three quick glimpses of exclusive content available only to subscribers.

Online resources for the topic of Christmas stamps

“Collecting Christmas stamps can be daunting,” writes William F. Sharpe in his Computers and Stamps column. To make this task a bit easier, Sharpe looks at a number of websites that can assist you with starting or expanding a collection of Christmas stamps. As you might expect, he begins with the American Topical Association, which has nine different Christmas stamp checklists totaling more than 13,000 items. He also wades into the debate about which stamp is the first Christmas stamp. “The first, defined as a stamp issued to commemorate the date, is Hungary’s 1943 set of three (Scott 617-619),” according to Sharpe. One of the stamps from this set is illustrated here. Other subjects Sharpe touches upon include Christmas Island and the Christmas Philatelic Club, which publishes Yule Log, a quarterly newsletter.

In Dollar-Sign Stamps, Charles Snee tells the story of a Priority Mail Express International cover that he mailed to Linn’s Stamps of Eastern Europe columnist (and former Linn’s senior editor) Rick Miller while he and his wife were visiting family in Lithuania. Snee mailed the cover with what he though was enough lead time for it to arrive in time for Miller to pick it up and then return it to Snee when he got home. “Well, that was the plan at any rate,” Snee explains. “Things, as they say, didn’t go according to plan.” Among several surprises that Snee encountered was the $71.50 postage required to mail the flat-rate Priority Mail Express International envelope. The cover spent a bit more than three months in the mailstream before Snee got it back. What happened during that time makes for an engaging read.

Linn’s regularly publishes three games to entertain readers: Trickies, a word scramble puzzle by Joe Kennedy; a word search puzzle by D.E. Rubin; and Philatelic Lexicon, a crossword puzzle by David Saks. In this week’s issue, Rubin’s word search challenges readers to find 25 housewares pictured on stamps from around the world. One of the items, a light bulb, is pictured on a Great Britain 17-penny Industry Year commemorative stamp issued in 1986 that is shown with the puzzle. Sharpen your pencil and have fun finding the other 24 words.