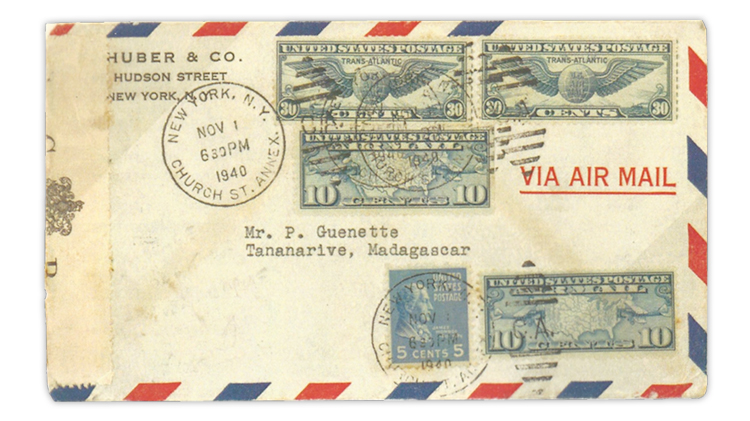 In Spotlight on Philately in the July 19 issue of Linn’s Stamp News, Ken Lawrence reviews two books featuring trans-Atlantic and trans-Pacific airmail covers flown aboard flying boats of the 1930s and 1940s.

The July 19 monthly issue of Linn’s Stamp News just landed on the presses and goes in the mail to subscribers Tuesday, July 6. And if you subscribe to Linn’s digital edition, you’re at the head of the line with early access Saturday, July 3. While you wait for your issue to arrive in your mailbox, enjoy these three quick glimpses of exclusive content available only to subscribers.

In Spotlight on Philately, Ken Lawrence provides detailed reviews of two books that explore the development of airmail transport during the 1930s and 1940s: Pan American’s Final Flight by Jon E. Krupnick, published in 2021, and Pan American Airways Wartime Transatlantic Air Mail: Censorship and the LATI Substitute by John Wilson and Frank Walton, published in 2020. Lawrence leads off with his assessment of Final Flight, which he says is focused “particularly to the author’s 80-page, 10-frame large gold medal and grand award-winning competitive exhibit ‘Pan Am Clippers Conquer the Pacific.’” Lawrence then takes up Wilson and Walton’s book, noting that its original contribution “is conveyed by the subtitle: postal censorship and the complex of wartime trans-Atlantic airmail routes that replaced the one flown by LATI.” LATI is the abbreviation for an Italian airline, Linee Aeree Transcontinentali Italiane. Lawrence takes a decidedly more favorable view of one the books, but aerophilatelists will likely want to have both in their libraries. The entire column merits a close read.

Matthew Healey, in Great Britain Philately, tells the fascinating story of an experimental Glascow, Scotland, postmark used during 1856-57 that played a role in the trial of a young woman named Madeleine Smith who was arrested and eventually charged with the murder of her secret lover, Pierre Emile L’Angelier. During the trial, correspondence between Smith and L’Angelier figured prominently, as Healey explains: “As prosecutors attempted to build a time line of the relationship between Smith and her lover, they relied on the correspondence, noting especially her sudden change in tone when L’Angelier refused her pleas to do the gentlemanly thing and return her steamy letters to him.” However, there was a problem because L’Angelier kept her letters in disarray. “The pile of correspondence was a mess. She was not in the habit of datelining her letters, so the postmarks on them became crucial,” Healey writes. Because of this the Glascow postmark on the letters eventually became widely known as the “Madeleine Smith” cancel. Are you curious about the trial verdict? Healey reveals the answer in his gripping account.

Stamps for military use from Finland, Denmark and Sweden

“Many countries have issued specific stamps for their armed forces, often providing free postage for military personnel on active duty or in connection with major military training events,” writes Christer Brunström in Nordic Stamp Scene. Of particular interest to collectors of Nordic military mail are the various military stamps from Finland, Denmark and Sweden. Denmark issued the very first adhesive military stamps in 1917. They are 5-ore and 10-ore King Christian X definitives overprinted “S F,” short for “Soldater-Frimaerker,” which means soldier’s stamps in English. One of the more unusual issues that Brunström highlights is a Swedish military stamped envelope with an ingenious feature. “Each cover has an imprinted stamp that makes it look like any other similar stamped cover. However, under the flap on the back is a printed gummed stamp that can be cut out using scissors and then used as a postage stamp on a card or letter addressed to a serviceman on active duty,” Brunström explains. The column provides a great introduction to these issues. To learn more Brunström recommends consulting the Swedish FACIT catalogs.