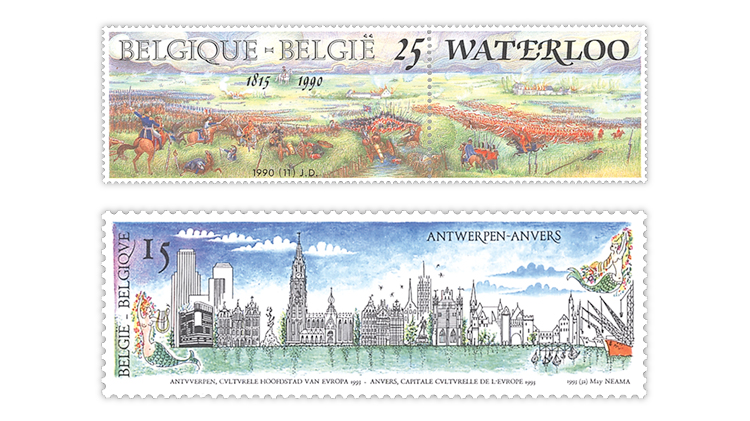 In Computers and Stamps in the Oct. 12 issue of Linn’s Stamp News, William F. Sharpe scours the internet to locate information about stamps that picture panoramic scenes. Shown are two panoramic stamps from Belgium that celebrate the Battle of Waterloo an

The Oct. 12 issue of Linn’s Stamp News just landed on the presses and goes in the mail to subscribers Monday, Sept. 28. And if you subscribe to Linn’s digital edition, you’re at the head of the line with early access Saturday, Sept. 26. While you wait for your issue to arrive in your mailbox, enjoy these three brief reviews of exclusive content available only to subscribers.

William F. Sharpe begins his Computers and Stamps column with a helpful definition: “A panorama is defined as an unbroken view of the whole region surrounding an observer or a picture or photograph containing a wide view.” He then goes on to picture a number of colorful issues with panoramic views, such as a 1988 Australian stamp featuring the limestone pillars known as the 12 Apostles. Several panoramic subjects, such as John Trumbull’s Declaration of Independence painting, are illustrated on United States se-tenant (side-by-side) stamps. Although countries have issued panoramic stamps for a number of years, Sharpe found it a challenge to find information about them online. By narrowing the search parameters, he did locate a website containing links to images of panoramic stamps, which he reveals at the end of the column.

If you study United States postal rates and fees, you can’t afford to be without the domestic and international rates books written by Tony Wawrukiewicz and Henry Beecher. However, as Wawrukiewicz explains in Modern U.S. Mail, new sources have emerged since the first editions these indispensable reference works were published in the 1990s. For example, Wawrukiewicz writes that he has produced current lists of domestic and international rates and fees through 2014, which are available for download from the U.S. Postal Bulletins website. For rates and fees from 1995 to 2019, Wawrukiewicz steers readers to the U.S. Postal Service’s Notice 123 files. Be sure to stay tuned because Wawrukiewicz has more to share on this subject in his next column.

“Grace periods allow collectors to buy stamps locally and submit their covers for a certain period of time after a stamp’s release and still receive a first-day cancel,” begins Wayne L. Youngblood in The Odd Lot. In 1974, three years before the U.S. Postal Service introduced grace periods, the 6.3¢ Liberty Bell coil stamp was issued in two varieties: a tagged collector version and an untagged Bureau precanceled version for use by bulk mailers. The existence of two versions launched tagging specialist Alfred “Tag” Boerger on a quest to obtain first-day covers bearing examples of both. Things got interesting when Boerger attended the October 1974 American Stamp Dealers Association show in New York City, where he purchased FDCs franked with both types for what Youngblood calls a “premium price.” At the same show, a dealer was advertising similar 6.3¢ Liberty Bell FDCs for $5 each. Boerger, according to Youngblood, “was furious.” Read the whole column to find out what happened next.