Inside Linn’s: Pierre-Auguste Renoir was a founder of Impressionism 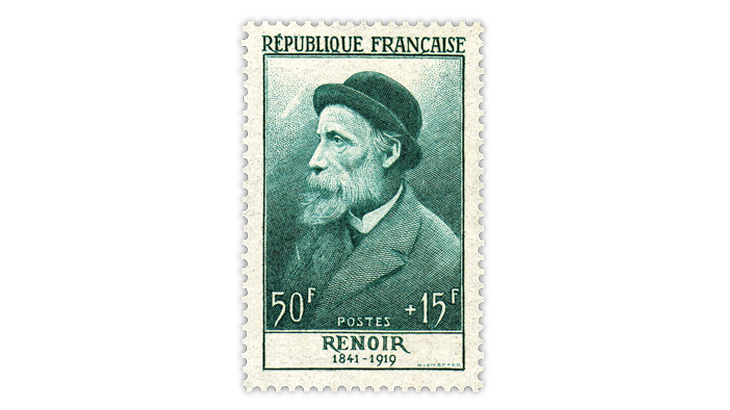 Pierre-Auguste Renoir ranks among the most famous of the Impressionist painters of the 19th century. In this month’s Philately of France column, Larry Rosenblum introduces the artist and his works, which remain extremely popular today.

The Dec. 16 monthly issue of Linn’s Stamp News just landed on the presses and goes in the mail to subscribers Monday, Dec. 2. And if you subscribe to Linn’s digital edition, you’re at the head of the line with early access the week of Dec. 2. Here we entice you with a trio of previews of exclusive content available only to subscribers.

Pierre-Auguste Renoir was a founder of Impressionism

Larry Rosenblum, in his Philately of France column, explores the life and works of Impressionist founder Pierre-Auguste Renoir, who was born Feb. 25, 1841, in Limoges, France. According to Rosenblum, “Renoir emphasized domestic life, portraits, and women in current fashions, though he painted many other subjects including landscapes and still lifes.

In Classic U.S. Postal History, Labron Harris sheds light on preprinted forms that numerous towns used to submit election results in the 19th century. Harris illustrates and discusses the preprinted forms used by two small towns in Maine, Bristol and Boothbay. Results were written on one side of the form, while the required signatures of election officials were provided on the other side. The forms were then folded and addressed before being mailed.

The 1-franc Ceres of France and its color variants

France’s 1-franc Ceres stamp, the second postage stamp of that country, was issued Jan. 2, 1849. In Unveiling Classic Stamps, Sergio Sismondo reviews the postal reform efforts that preceded the stamp’s issuance and explains how confusion on the part of postal officials precipitated the production of 1fr Ceres stamps in various shades of red brown. Collectors of early France will want to save this column for future reference.