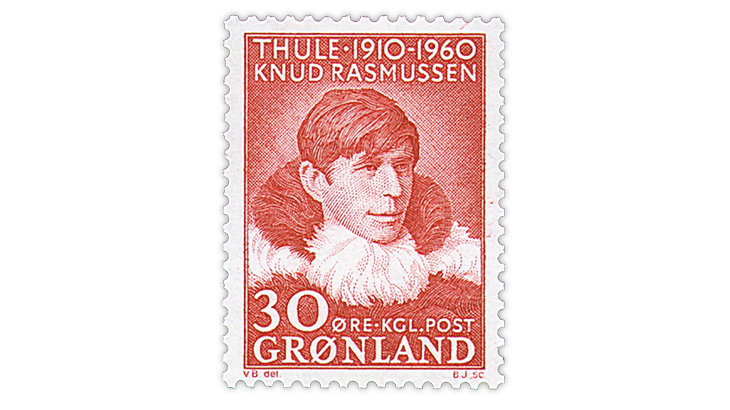 In Nordic Stamp Scene in the July 20 issue of Linn’s Stamp News, Christer Brunström celebrates renowned polar researcher and author Knud Rasmussen and his connections to Greenland and Thule. Rasmussen is pictured on this 30-ore stamp issued by Greenland i

The July 20 monthly issue of Linn’s Stamp News just landed on the presses and goes in the mail to subscribers Monday, July 6. And if you subscribe to Linn’s digital edition, you’re at the head of the line with early access Saturday, July 4. While you wait for your issue to arrive in your mailbox, enjoy these three brief reviews of exclusive content available only to subscribers.

Knud Rasmussen and his connections to Greenland and Thule

Christer Brunström, in Nordic Stamp Scene, traces the dynamic life and times of Knud Rasmussen. Born in 1879, Rasmussen became a celebrated explorer and author. In 1910 he founded a trading station in the Thule district in northwestern Greenland, which issued a total of five stamps during 1935-36. Using a combination of photos and stamps from Greenland and Thule, Brunström tells a most engaging story about Rasmussen, his numerous expeditions and how he built a summer home that provided the needed tranquility to focus on his writing. Be sure to read the entire column to gain a full appreciation of this fascinating person.

“United States county cancels of the 1880s have long been a popular collecting area. There are a great many types and locations to acquire. Well before this time period, however, postmasters used county names in their postmarks,” writes Labron Harris in Classic U.S. Postal History. Harris illustrates five covers mailed before 1860 that demonstrate how these county cancels evolved from plain manuscript markings to ornate handstamps that can add great eye appeal to a cover. One of the postmarks Harris discusses is quite scarce, with just two known examples. Dig into the column to learn which one.

German occupation stamps used in Belgium during World War I

Shortly after its 1914 invasion of Belgium, Germany created occupation stamps from its own regular issues, surcharged in Belgian currency. Lawrence F. Skalak III, in an engaging feature, explains how the surcharges were applied to various German stamps issued during the 1914-18 war years. The beauty of some of these stamps stands in stark contrast to the burdens Belgium endured during the German occupation. Striking a positive concluding note, Skalak observes that studying these stamps and the history behind them “is just one way that collecting stamps is both rewarding and reflective.”