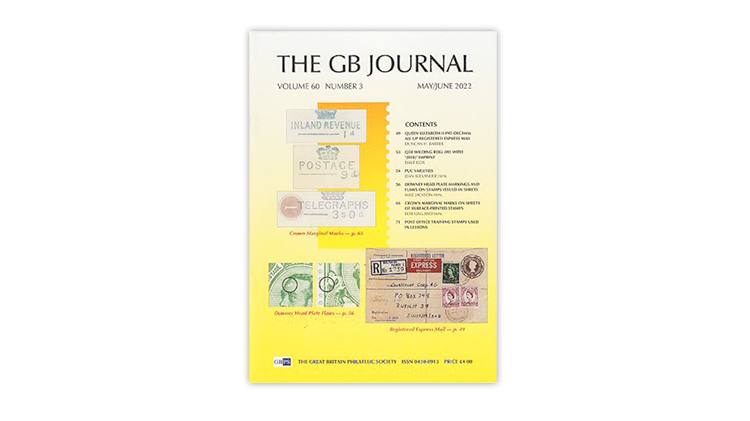 In Great Britain Philately in the June 20 monthly issue of Linn’s Stamp News, Matthew Healey reviews philatelic resources that can help a collector discover unlisted varieties that might lurk in unexpected places.

The June 20 monthly issue of Linn’s Stamp News just landed on the presses and goes in the mail to subscribers Monday, June 6. And if you subscribe to Linn’s digital edition, you’re at the head of the line with early access Saturday, June 3. While you wait for your issue to arrive in your mailbox, enjoy these three quick glimpses of exclusive content available only to subscribers.

Progressing beyond the Scott catalogs

“Collectors often reach a point where they run out of steam in their chosen area. They’ve acquired all the affordable stamps they can find, and they aren’t quite sure what happens next,” begins Matthew Healey in Great Britain Philately. To clear a path toward further expansion and exploration, Healey takes readers on an informative guided tour of British philatelic resources that go beyond standard references such as the Scott Classic Specialized Catalogue of Stamps and Covers 1840-1940. He also discusses in detail a handful of specialized areas that might tempt a Great Britain collector to dig more deeply, such as “unlisted types of Penny Reds, Victorian fiscal stamps used postally, constant flaws on Victoria and the four kings, and alterations in the sizes of King George V photogravure stamps.” If you’re looking to broaden your collecting horizons, be sure to read Healey’s column.

Discovering the when and where of the first airplane mail flight

Ken Lawrence, in Spotlight on Philately, launches the first of a two-part voyage of discovery to learn when and where the first airplane mail took to the skies. Part 1, presented this month, focuses on airmail flights that occurred in 1910. By 1910, the benefits of transporting mail on airplanes seemed indisputable, but airmail collectors disagree as to which pilot on which date in which country was the first to have achieved that goal. To provide essential context for these early pioneer airmail flights, Lawrence introduces four categories of related postal history: pilot’s favor airmail, flight sponsor’s favor airmail, dedicated aviation event mail (including privileged dedicated aviation event airmail) and ordinary airmail. An understanding of these groupings will allow you to get the most from Lawrence’s scholarly review of the nine items pictured in the column.

Joe Brockert opens his Philatelic Backstory column thus: “Around 1989, serious consideration was being given to creating United States stamped envelopes for professional sports teams, Disneyland and other popular subjects considered too commercial for stamps. Those efforts lasted only a few short years, but their brief history was interesting nonetheless.” Brockert took on this postal stationery development project not long after he joined the U.S. Postal Service’s Stamps Division. The main drivers were the inherent profitability of stamped envelopes, because they were sold for a few cents above face value, and the more relaxed rules regarding the suitability of subjects that could be portrayed on them. One of his early mock-ups shows the helmet of a certain National Football League team that recently changed its name following years of social and political pressure. The name of the team and much more await in this fascinating account.