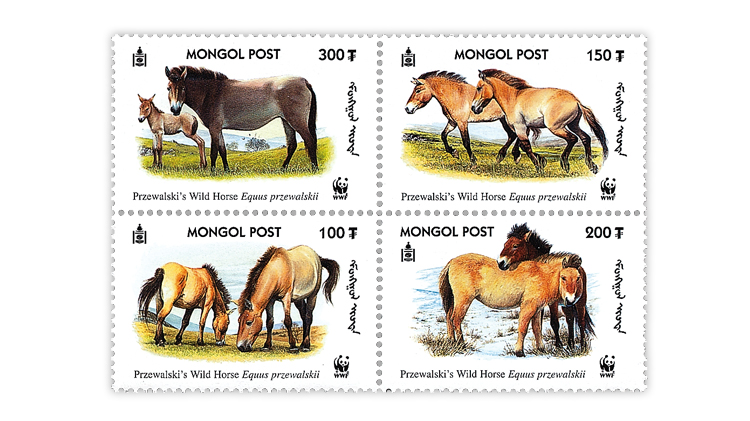 In the Oct. 24 issue of Linn’s Stamp News, Stamps of Eastern Europe columnist Rick Miller looks at stamps celebrating Przewalski’s horse, a species brought back from the brink of extinction.

The Oct. 24 issue of Linn’s Stamp News just landed on the presses and goes in the mail to subscribers Monday, Oct. 10. And if you subscribe to Linn’s digital edition, you’re at the head of the line with early access Saturday, Oct. 8. While you wait for your issue to arrive in your mailbox, enjoy these three quick glimpses of exclusive content available only to subscribers.

Przewalski’s horse is named for Polish-Russian geographer and explorer Nikolaj Mikhaylovich Przewalski. “Przewalski was the first to describe several species of large mammals previously unknown to European science: Przewalski’s gazelle, the wild Bactrian camel, and, most importantly for our story, Przewalski’s horse,” explains Rick Miller in Stamps of Eastern Europe. Miller illustrates stamps picturing this majestic horse from the Soviet Union, Bulgaria, Mongolia, Czechoslovakia, Poland and the Czech Republic. Two of the stamps from the Soviet Union, issued in 1947, also picture Przewalski. According to Miller, the last sighting of a Przewalski’s horse in the wild was in 1969. Since then, the horse has been reintroduced in Mongolia, China and Russia.

“What happens when two top exhibitors both collect the same issue?” asks Lloyd de Vries in his First-Day Covers column. “They can either go to war, competing for the same one-of-a-kind items, or collaborate.” De Vries goes on to write about Peter J. LaPlaca and Anthony F. Dewey, who decided to team up to write a book titled The Connecticut Tercentenary Issue of 1935. The book is a detailed exploration of the history, development, production, first day of issue and postal uses of the United States 1935 3¢ Connecticut Tercentenary stamp (Scott 772). Both LaPlaca and Dewey have received gold medals for their exhibits that focused on FDCs of the Connecticut Tercentenary stamp. In their book, “LaPlaca and Dewey not only show all known cachets for this stamp, but also postmarks, postmark usages, the letters and other inserts that were included with some covers, and even a map showing towns where unofficial location postmarks were serviced,” de Vries writes. As an added bonus, de Vries also details the discovery of a new use of a railway post office marking on a 1932 3¢ Washington Bicentennial FDC.

Trickies: a humorous twist on the sport of hurdling

Linn’s regularly publishes three games to entertain readers: Trickies, a word scramble puzzle by Joe Kennedy; a word search puzzle by D.E. Rubin; and Philatelic Lexicon, a crossword puzzle by David Saks. In this week’s issue, the solution to Kennedy’s Trickies puzzle provides a humorous twist on the sport of hurdling. Illustrated with the puzzle is a 1959 1-koruna stamp from Czechoslovakia picturing a male hurdler leaping over a hurdle.