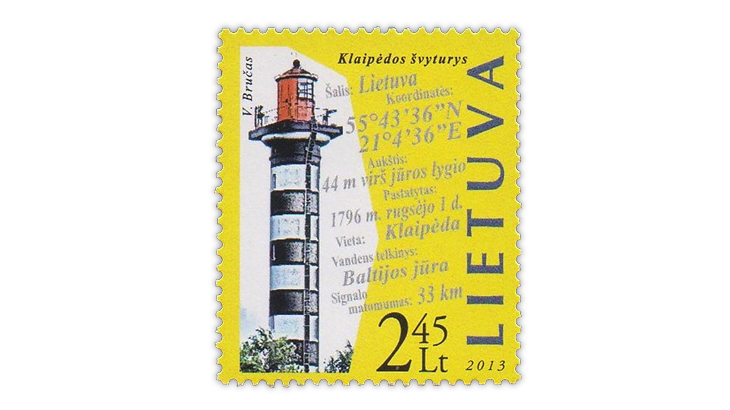 In Stamps of Eastern Europe in the Feb. 22 issue of Linn’s Stamp News, Rick Miller reviews some of the colorful Lithuanian stamps associated with Klaipeda, the third largest city in Lithuania.

The Feb. 22 issue of Linn’s Stamp News just landed on the presses and goes in the mail to subscribers Monday, Feb. 8. And if you subscribe to Linn’s digital edition, you’re at the head of the line with early access Saturday, Feb. 6. While you wait for your issue to arrive in your mailbox, enjoy these three quick glimpses of exclusive content available only to subscribers.

Many stamps of Lithuania celebrate the city of Klaipeda

Klaipeda, Lithuania’s primary seaport and the capital of Klaipeda County, was founded in the mid-13th century by the legendary Teutonic Knights. As Rick Miller explains in Stamps of Eastern Europe, Klaipeda began as the castle of Memelburg. “The city grew up around the castle, and the castle’s name was later shortened to Memel. With the waning of the Teutonic Knights, Memel and its surrounding territory passed to the Duchy of Prussia,” Miller writes. His philatelic tour of Lithuanian stamps connected to Klaipeda begins with a 5-litas souvenir sheet of one issued Aug. 1, 2002, to recognize the 750th anniversary of the city’s founding. Also illustrated is a 2-litas stamp picturing Klaipeda Harbor and its famous black-and-white striped lighthouse that was issued in 2012 for the 760th anniversary of the founding. Miller recounts significant events that affected Klaipeda during World War I and World War II. He concludes with a personal recollection and pictures a 2001 1-litas stamp that features a windswept Baltic Coast landscape. You won’t want to miss Miller’s engaging tour of the colorful Lithuanian stamps that celebrate Klaipeda’s history.

In Middle East Stamps, Ghassan Riachi begins with a recollection of a philatelic encounter with the brother of a neighbor when he was a teenager in Lebanon in the 1970s: “I recall Omar showing us a black-and-white photo of a Hejaz stamp affixed to a piece of a cover with an Amman postal cancellation. He said that this was one of the most important philatelic pieces that he owned.” Why? Because, according to Omar, it showed that the Kingdom of Hejaz, which today is in Saudi Arabia, had occupied Transjordan. Riachi recalls being most impressed with Omar’s presentation because he “spoke with authority.” Riachi then recounts how he “started to learn about the history of a country as it was told through its stamps.” By way of methodical research over the years, Riachi eventually learned that the Hejaz stamp in Omar’s photo was missing a critical element — an overprint that should have been applied to the sheet of stamps from which it came before the sheet was sent to Transjordan for use in that country. And that’s where the misunderstanding lies because Transjordan was never occupied by the Kingdom of Hejaz. Be sure to read the entire column — a surprise awaits at the end.

First-Day Covers columnist Lloyd de Vries takes exception to a recent pessimistic comment about the state of the FDC community from a member of the American First Day Cover Society. De Vries, who is president of the AFDCS, sees things in a more positive light: “I think FDC collecting is holding its own and even showing some growth, much as the rest of philately, during the pandemic-fueled shutdowns.” He points to membership in the AFDCS, which has increased modestly during the past year, and the presence of FDC collectors who eschew various hobby organizations and don’t subscribe to philatelic publications. De Vries provides additional context via a brief review of some of the changes that have affected FDC collecting, such as the loss of cachet catalogs that provided issue dates, official first-day cities and cover values. He also touches upon what he calls “the burst of popularity” in FDC collecting that occurred in the late 1970s and early 1980s. De Vries’ insights will benefit all FDC collectors.