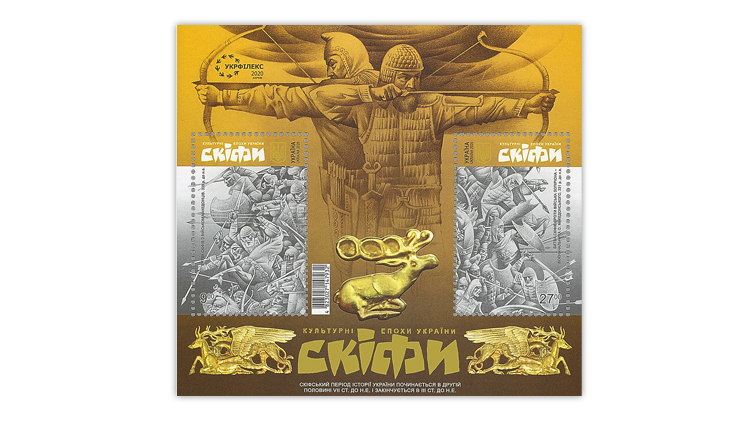 Scythian battle scenes are illustrated on a Ukrainian 2020 souvenir sheet of two commemorating the Scythian cultural epoch of Ukraine. Rick Miller introduces readers to the Scythians in Stamps of Eastern Europe in the Nov. 29 issue of Linn’s Stamp News.

The Nov. 29 issue of Linn’s Stamp News just landed on the presses and goes in the mail to subscribers Monday, Nov. 15. And if you subscribe to Linn’s digital edition, you’re at the head of the line with early access Saturday, Nov. 13. While you wait for your issue to arrive in your mailbox, enjoy these three quick glimpses of exclusive content available only to subscribers.

Storied legacy of the Scythians illustrated on stamps

“The Scythians, a nomadic people of Eurasia, ruled the Pontic steppe north of the Black Sea from about the seventh century B.C. to the third century A.D.,” writes Rick Miller in Stamps of Eastern Europe. Miller launches his philatelic exploration of the Scythians with 1966 Soviet Union stamp showing a Scythian golden stag from the sixth century B.C. that is housed in the Hermitage in St. Petersburg, Russia. He also pictures a 2019 €1 stamp from Greece picturing Herodotus. Known as “the father of history,” Herodotus is considered the primary source for information about the Scythians. Other stamps illustrated in Miller’s column feature Scythian burial mounds, known as kurgans; an ornament of a standing horse, because the Scythians spent a great deal of time on horseback; and Scythian battle scenes.

Included in Henry Gitner and Rick Miller’s Stamp Market Tips column is the Tip of the Week. Like the main column, each tip rotates between a United States issue and an international issue. This week’s tip focuses on a set of three United Arab Emirates stamps issued in 1977 to commemorate the sixth National Day. This annual observance marks the federation of the first six emirates on Dec. 2, 1971. Ras al Khaimah joined the federation in 1972. “The designs of all three stamps feature a profile of Sheik Zayed and the eagle crest of the United Arab Emirates,” write Gitner and Miller. This Sixth National Day stamps were withdrawn on the first day of sale, but some were sold and used, according to Gitner and Miller. The stamps are not listed in the Scott Standard Postage Stamp Catalogue. However, they are noted, and a value is provided for the set. Read the whole tip for the rest of the details.

In each weekly issue of Linn’s, either E. Rawolik VI or E. Rawolik VII dissects the contents of a stamp mixture offered to collectors. E. Rawolik is a pseudonym that is also the word “kiloware” (a stamp mixture) spelled backward. This week, E. Rawolik VII takes on a worldwide mixture from a dealer in Florida who promised $120 in Scott catalog value for the $10 price. Rawolik elected to review half of the mix — 67 of the 134 stamps received. Stamps from 16 countries were in the sample. Germany, with 10 stamps, had the most. France and Norway came in with eight stamps each. The years of issue spanned from 1900 to 2020, but almost half the stamps were issued in this century. Two stamps issued by the same country in 2018 combined for a total catalog value of $8.75. Dig into the column to learn more about them and whether the actual catalog value of the sample was more or less than the promised $60.