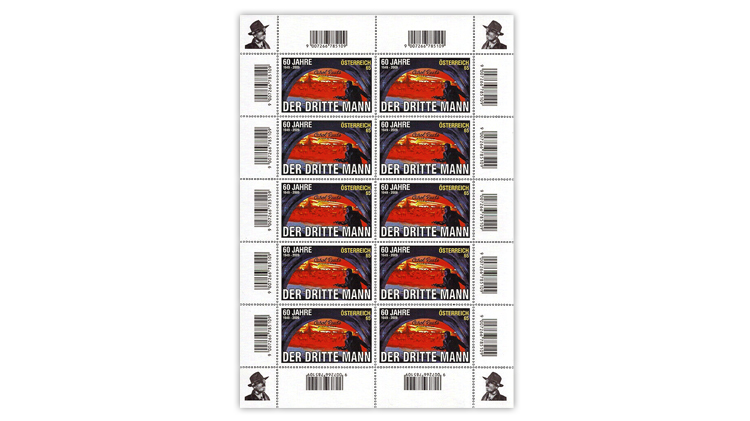 In Stamps of Eastern Europe in the April 27 issue of Linn’s Stamp News, Rick Miller examines the post World War II occupation of Austria as seen in the acclaimed 1949 film, The Third Man.

The April 27 issue of Linn’s Stamp News just landed on the presses and goes in the mail to subscribers Monday, April 13. And if you subscribe to Linn’s digital edition, you’re at the head of the line with early access Saturday, April 11. While you wait for your issue to hit your mailbox, enjoy these three previews of exclusive content available only to subscribers.

Rick Miller, in Stamps of Eastern Europe, summarizes the post World War II occupation of Austria and explores how that turbulent time served as a dark and shadowy backdrop in The Third Man, the highly regarded film starring Joseph Cotten and Orson Welles that was released in 1949. Along the way, Miller features Austrian stamps that pay tribute to the movie that appears on the American Film Institute’s top 100 list as the 57th best film of all time.

In First-Day Covers Lloyd de Vries recounts the efforts of First Days advertising manager Mark Thompson to obtain unofficial first-day cancels on advertiser invoice mailings that were franked with the U.S. Maine Statehood stamp. Thompson’s quest became more complicated when the original issue date for the Maine Statehood stamp was moved from March 16, a Monday, to Sunday, March 15. Thompson also had to work around the substantial damage to his Nashville, Tenn., home from the tornadoes that roared through Nashville on March 3. You won’t want to miss de Vries’ gripping account.

In each weekly issue of Linn’s, either E. Rawolik VI or E. Rawolik VII dissects the contents of a stamp mixture offered to collectors. E. Rawolik is a pseudonym that is also the word “kiloware” (a stamp mixture) spelled backward. This week, E. Rawolik VII sings the praises of a compact assortment of worldwide stamps with substantial catalog value. “Schaefer’s packet was easily the best I’ve seen in years — maybe ever,” Rawolik VII writes.