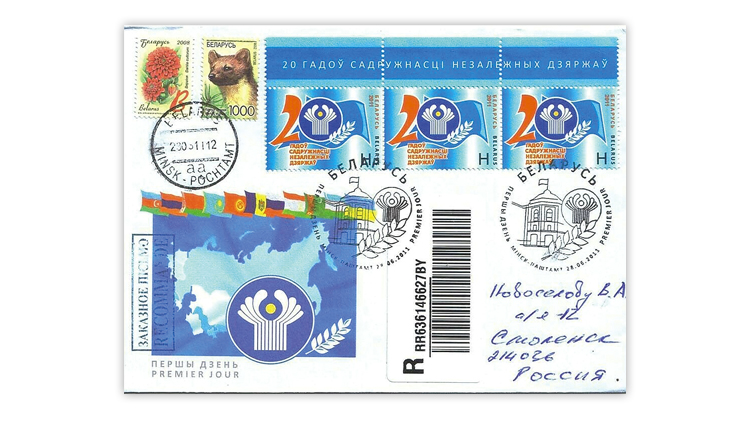 In the Sept. 26 issue of Linn’s Stamp News, Stamps of Eastern Europe columnist Rick Miller looks at stamps and covers related to the Commonwealth of Independent States.

The Sept. 26 issue of Linn’s Stamp News just landed on the presses and goes in the mail to subscribers Monday, Sept. 12. And if you subscribe to Linn’s digital edition, you’re at the head of the line with early access Saturday, Sept. 10. While you wait for your issue to arrive in your mailbox, enjoy these three quick glimpses of exclusive content available only to subscribers.

The enigmatic Commonwealth of Independent States

In Stamps of Eastern Europe, Rick Miller raises a question: What exactly is the Commonwealth of Independent States? As readers will learn when reading Miller’s column, the answer is not straightforward. The stamps Miller uses to illustrate this fascinating story show the CIS emblem, which consists of “a yellow sun on a dark blue field supported by eight bending poles,” according to Miller. The colorful cacheted registered first-day cover illustrated here was mailed from Minsk, Belarus, to Smolensk, Russia, on June 28, 2011. The cover bears a strip of three Belarus nondenominated (1,330-ruble) commemoratives for the 20th anniversary of the CIS issued the same day. Miller’s philatelic primer on the CIS is an informative read.

Sacramento was a real ‘GASS’ for first-day covers

In each weekly issue of Linn’s, either E. Rawolik VI or E. Rawolik VII dissects the contents of a stamp mixture offered to collectors. E. Rawolik is a pseudonym that is also the word “kiloware” (a stamp mixture) spelled backward. This week, E. Rawolik VI sifts through a 55-stamp sample from a worldwide assortment offered for $2 by a seller in New York. “My first impression was that I had received stamps from an interesting variety of countries,” Rawolik writes. The stamps in the reviewed sample were issued from 1907 to 2012, with the earliest stamp from Reunion and the two most recent from the Marshall Islands. Rawolik also noted receiving 10 more stamps than promised. Enjoy the full review in this issue.