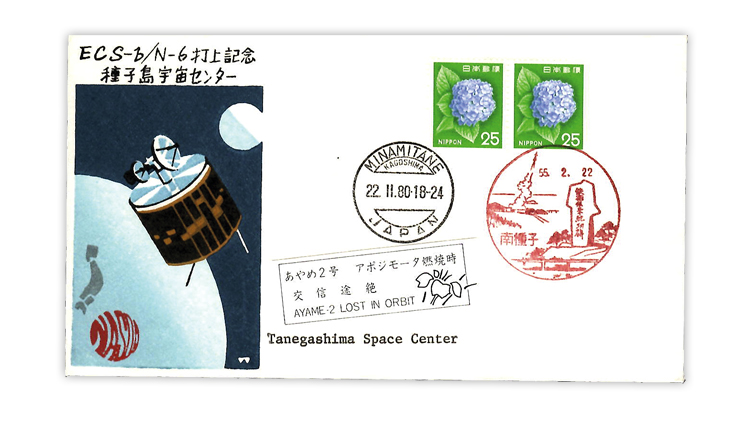 The Dec. 12 issue of Linn’s Stamp News just landed on the presses and goes in the mail to subscribers Monday, Nov. 28. And if you subscribe to Linn’s digital edition, you’re at the head of the line with early access Saturday, Nov. 26. While you wait for your issue to arrive in your mailbox, enjoy these three quick glimpses of exclusive content available only to subscribers.

In Exploring Astrophilately, Charles J. Vukotich Jr. introduces readers to a series of space covers that were produced for more than 30 years. “In 1980, Ginza Watanabe Inc., with the cooperation and recognition of the National Space Development Agency, began a series of space covers, which continued to 2012,” Vukotich writes. “These space covers employ traditional Japanese materials and production methods in all stages of their creation.” He provides background on the types of handmade paper used to produce the envelope, one of which dates back more than 1,400 years. According to Vukotich, the decorative cachets on the covers were created using a “traditional Japanese woodblock printing method called ukiyo-e, which originated and flourished during the Edo period (1603-1867).” Seven different woodblocks were used to make the cachet on the cover shown here.

According to The Odd Lot columnist Wayne Youngblood, this particular philatelic horror story can trace its roots to Joseph William Palmer (1853-1931), “the first stamp dealer to have a shop on the now-famous Strand in London.” Palmer took a very dim eye to fakes and forgeries, so he launched his “Chamber of Philatelical Horrors” in his office. “Whenever Palmer encountered a stamp he believed was fake, even if it was a client’s, it was immediately pasted to his wall,” Youngblood explains. As it turns out, Youngblood has what he calls “Wayne’s Chamber of Philatelical Horrors,” which showcases items “that for all practical purposes, have been destroyed by poor stewardship, ignorance or greed.” Of this trio of sins, Youngblood  views greed as “the most heinous of crimes against philately.” He then looks at the case of two stamps that were purposely altered to make them appear more valuable. There is a twist to this example of philatelic vandalism, so be sure to read to the end.

In an informative feature article, David A. Norris pays tribute to Felix Eboue (1884-1944), whose efforts on behalf of the Free French resistance during World War II earned him wide acclaim and respect. In 1945, following his 1944 death in a hospital in Cairo, 13 French colonies celebrated Eboue with an omnibus issue. The names of the colonies and the Scott catalog numbers of their respective stamps are presented in a table accompanying Norris’ story. “Each colony’s set had two identically designed stamps, most sets with a black 2-franc and a Prussian green 25fr value,” Norris writes. Pictured with the article are the two Felix Eboue stamps from French Guiana. Norris concludes by mentioning that Eboue has been honored on later stamps from French Equatorial Africa, Chad and France.