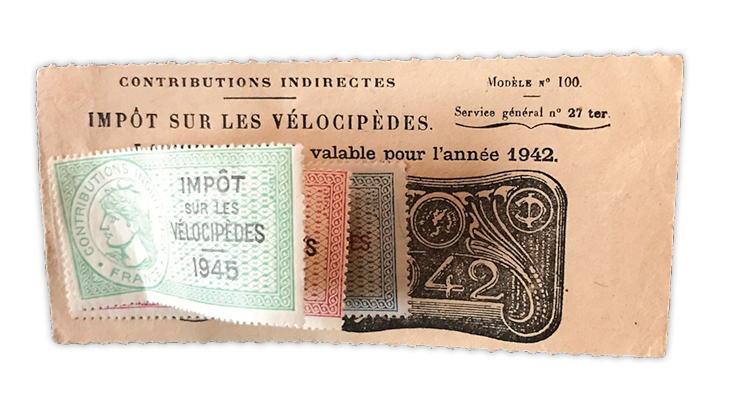 In The Odd Lot in the April 13 issue of Linn’s Stamp News, Wayne L. Youngblood digs into the fascinating history of revenue stamps used in France for 65 years to collect a luxury tax on bicycles and other similar vehicles.

The April 13 issue of Linn’s Stamp News just landed on the presses and goes in the mail to subscribers Monday, March 30. And if you subscribe to Linn’s digital edition, you’re at the head of the line with early access Saturday, March 28. While you wait for your issue to hit your mailbox, enjoy these three glimpses of exclusive content available only to subscribers.

Wayne L. Youngblood, in The Odd Lot, embarks on a quest to learn more about some rather unusual revenue stamps — made of both paper and metal — that were used collect a tax on bicycles in France. The tax, first enacted in 1893, was in effect until 1958. Incredibly, adhesive perforated bicycle revenue stamps exist for just six years of this 65-year span: 1944-48. As Youngblood explains, metal shortages during World War II precipitated the use of the adhesive stamps.

Clearing up errors in the U.S. international postal rates book

Do you have a copy of U.S. International Postal Rates 1872-1996 in your philatelic library? If so, you’ll want to keep handy Tony Wawrukiewicz’s Modern U.S. Mail column, wherein he corrects an error in the chapter dealing with international registration, specifically the fee for an international return receipt that went into effect on April 15, 1925. Noted postal historian Ken Lawrence brought the mistake to the attention of Wawrukiewicz, who discusses and illustrates two registered covers that explain the error.

Tip of the week: PRC 1980 Year of the Monkey stamp

This week, Stamp Market Tips columnists Henry Gitner and Rick Miller revisit a stamp that they call “a bellwether for the Chinese market”: the People’s Republic of China 8-fen Year of the Monkey stamp issued Feb. 15, 1980. Gitner and Miller note that the stamp in mint never-hinged condition is selling below its previous highs. To learn how much values have softened, you’ll have to read the entire tip.