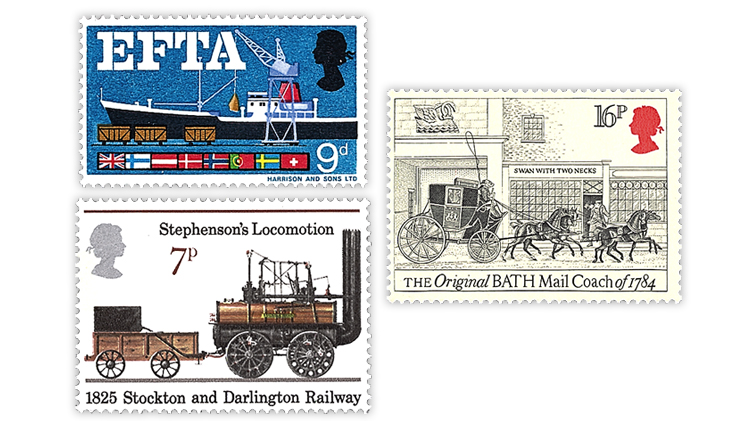 In Great Britain Philately in the Jan. 17 issue of Linn’s Stamp News, Matthew Healey explores how trains and railroads have been depicted on British stamps.

The Jan. 17 issue of Linn’s Stamp News just landed on the presses and goes in the mail to subscribers Monday, Jan. 3. And if you subscribe to Linn’s digital edition, you’re at the head of the line with early access Saturday, Jan. 1. While you wait for your issue to arrive in your mailbox, enjoy these three quick glimpses of exclusive content available only to subscribers.

Climb aboard as Great Britain Philately columnist Matthew Healey takes readers on a fascinating exploration of British stamps featuring trains and railroads. “The explosion in letter mail volume in the British Isles during the 1840s came largely thanks to Rowland Hill’s reforms and the introduction of uniform penny postage. Just as important, however, was the rapid expansion of the railroads, which for the first time allowed people and goods to travel overland faster than a galloping horse,” Healey explains. Despite the rapid expansion of railway systems, it would take more than 100 years for Great Britain to issue a postage stamp picturing a train. The stamp, issued in 1967, actually shows three boxcars. Come along for the rest of the ride with Healey as your conductor. You won’t be disappointed.

The fighting spirit of Poland during World War II

“At 4:48 a.m. on Sept. 1, 1939, World War II began in Europe. The 11-inch guns of the German battleship Schleswig-Holstein blasted the Polish garrison at the naval depot at Westerplatte. There was no declaration of war. Some 1.5 million German and Slovak troops poured across the western, northern and southern borders. Germany’s invasion of Poland had begun,” writes Lawrence F. Skalak III in his fascinating philatelic tribute to Poland’s fighting spirit in the Second World War. To tell this riveting story, Skalak uses a dozen Polish stamps that highlight pivotal events for Poland during the war. One of the more dramatic issues is 2.40-zloty stamp issued in 2009 to remember the 70th anniversary of the senseless German bombing of Wielun, an act that Skalak describes as “a stark harbinger of worse to come.” Skalak’s bracing narrative and the stamps provide a sobering, informative history lesson.

In Nordic Stamp Scene, Christer Brunström introduces readers to Swedish stamps devoted to the topic of sports. Brunström begins his review with a quick summary of the more popular sports, many of which take place in winter because Sweden and the other Nordic countries have long winters and short summers. “The premier summer sport is soccer (called football in Europe), which is practiced from the top level to local leagues,” Brunström explains. Of the stamps illustrated in the column, the oldest is an 1888 local post stamp from the Gothenburg Private Local Post that “features two fighters tied together using a belt. Each combatant was equipped with a dagger, and it apparently was a life-and-death fight,” according to Brunström. Among the sports shown on the other stamps Brunström pictures are speed skating, ski jumping, gymnastics, ice hockey and soccer. Brunström concludes by noting that all the stamps he shows are inexpensive and available from numerous dealers.