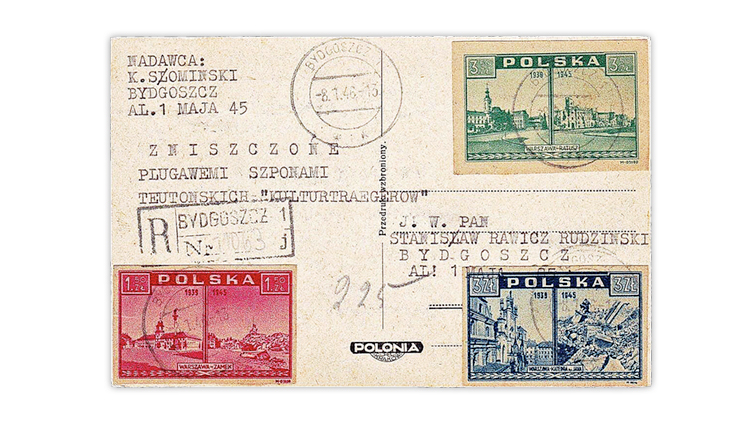 In Great Sets of the World in the March 15 issue of Linn’s Stamp News, Fred Baumann tells the gripping story of the 1945-46 Warsaw Complains stamps of Poland and their associated postal history.

The March 15 monthly issue of Linn’s Stamp News just landed on the presses and goes in the mail to subscribers Monday, March 1. And if you subscribe to Linn’s digital edition, you’re at the head of the line with early access Saturday, Feb. 27. While you wait for your issue to arrive in your mailbox, enjoy these three quick glimpses of exclusive content available only to subscribers.

A 2017 letter from an accomplished United Nations ambassador motivated Fred Baumann to dive into a set of Polish stamps issued in 1945-46 that, in the words of the ambassador, were issued “to commemorate and explain to the world how much [Poland’s] capital of Warsaw had suffered during the war.” Baumann writes that the English translation of the set’s name, Warsaw Complains, “is apt, but it fails to capture the bitterness. If any European capital had just cause for grievance, it was Warsaw — first to be bombed by Germany in 1939, yet one of the last to change hands in 1945 as the Red Army replaced Hitler’s thugs.” Each stamp in the set shows a Warsaw landmark in 1939, before the German invasion, and in 1945, after the destruction wrought by the Germans. The stamps serve as a powerful reminder of the depravities of war. To add power to his story, Baumann illustrates and describes covers franked with Warsaw Complains stamps. His research reveals some fascinating stories about some of the addressees. World War II topical collectors and postal historians will want to add this column to their reference files.

In Spotlight on Philately, Ken Lawrence introduces readers to postal cards that were sent around the world during the late 19th century. He sets the stage with a brief review of some of the technological advances that made these cards’ journeys possible: “the North American transcontinental railroad, which opened in 1869, the Suez Canal that same year, and the linkup of railways across the Indian subcontinent in 1870.” Lawrence also mentions the critical role of the Universal Postal Union and the establishment of uniform postal rates and regulations. The first of the four cards that Lawrence illustrates and describes in detail was mailed on May 24, 1878, from Chemnitz, Germany. The sender, Leo Ploss, wagered that the card would make its round-the-world trip in less than 120 days. Did Ploss win his bet? You’ll have to read Lawrence’s stirring account to find out.

An appreciation of Switzerland’s mountains shown on its stamps

In 1914 Switzerland began issuing stamps that highlight the country’s impressive mountains and associated ranges. Richard Hall, in Swiss Stamp Scene, takes readers on a guided tour of these geologic formations using Swiss commemoratives. One of the more notable peaks is the Jungfrau, which is part of the famous trio of the Eiger, Monch and Jungfrau that is part of the Bernese Alps. The trio appears on a panoramic strip of three 2006 85-centime stamps that show a continuous design, otherwise known as a triptych. The bottom selvage of this strip gives the height of each mountain in meters. Switzerland’s most recognizable peak, the Matterhorn, appears on several stamps that Hall illustrates. One of these is an attractive 200c Swiss Landscapes souvenir sheet issued in 2013. If, after reading this column, you want more Swiss mountains on stamps, keep an eye out for Hall’s next column because he plans to showcase the mountains on Switzerland’s various definitive series.