Fond memories of past internationals and looking forward to WSS-NY 2016: Editor’s Insights 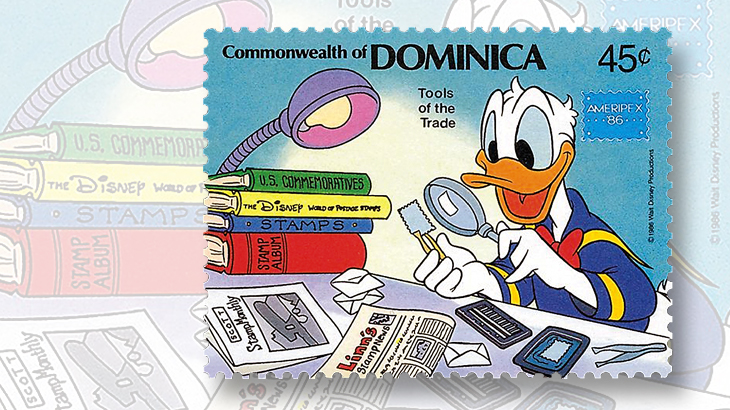 The Windward island of Dominica issued a stamp for the Ameripex international show that featured the front page of Linn’s Stamp News.

Those of us fortunate enough to have attended international shows in the past can attest to the amazement we experienced when we first walked through the entrance. The experience is simply breathtaking.

Before attending my first international stamp show, Ameripex 86 in Chicago, I had been to numerous stamp shows across the United States and in the British Isles. Nothing compared to the electrifying feeling that I felt when I walked into the O’Hare Exposition/Convention Center (later renamed the Donald E. Stephens Convention Center).

At the time, I authored (under the name Donna O’Keefe) the Philatelic Gems column in Linn’s, which developed into a series of five books under the same title featuring short stories about the hobby’s greatest rarities. I was thrilled to walk through the court of honor and see exhibited many of the stamps that I had written about.

Linn’s Stamp News published daily newspapers for each day of the 11-day show. The show was the Linn’s editorial staff’s first attempt at using computers from a remote location to write stories and send them back to Sidney, Ohio, for layout. Each afternoon, the tabloid-size daily newspapers were printed on the newspaper press at our home offices at Linn’s parent company Amos Press (now Amos Media) after the hometown newspaper, the Sidney Daily News, was printed. The special edition show daily newspapers were then trucked to Chicago for delivery early the next morning. The special editions were handed out when the show opened at 10 a.m. each day.

Linn’s is attempting a similar, but not quite as ambitious feat at World Stamp Show-NY 2016, which will take place May 28-June 4 at the Javits Convention Center in New York City.

Linn’s will produce three special editions for the show that will be given away to visitors Sunday May 29, Monday May 30, and Thursday June 2.

Once again, stories and images will be sent to our offices in Sidney for layout. We no longer have the giant press, so the papers will be printed off-site and delivered to the Javits Center in time to be placed in the hands of visitors when the show opens at 10 a.m. on those days.

I will never forget my first international stamp show. Disney characters were milling around the Ameripex show floor because Disney-themed stamps were issued during the show. One stamp (Dominica Scott 955) featured Donald Duck examining a front page of Linn’s and the cover of Scott Stamp Monthly. Above all else, I am grateful for new acquaintances I met at Ameripex that 30 years later have developed into lasting friendships.

We look forward to the New York show with much anticipation and excitement. By all indications, the eight-day event promises to be a spectacular experience.

Recalling a life and career in the remarkable world of philately