Ireland pays tribute to U2 with stamp set, souvenir sheet 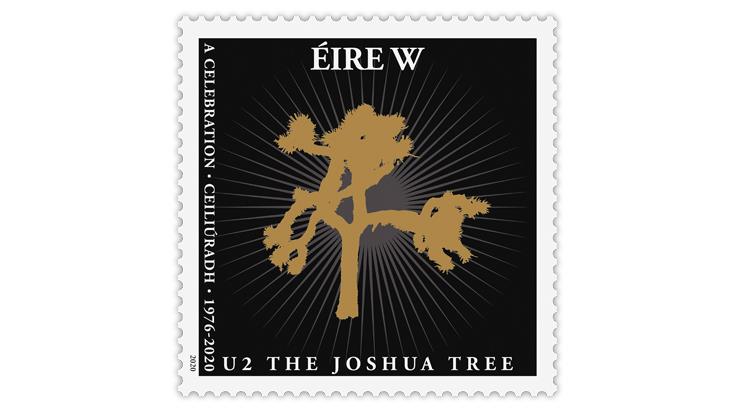 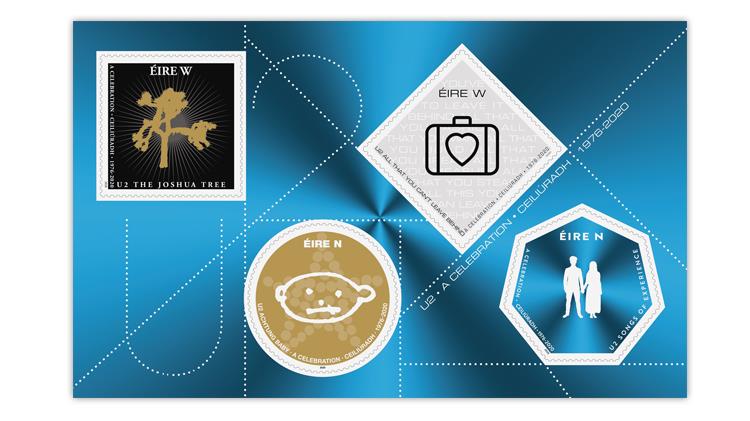 The four stamps featuring U2 album titles are offered in booklets of four and also in this single small pane. Each stamp is processed in a different shape, and the lithographed designs are accented with hot foil stamping. 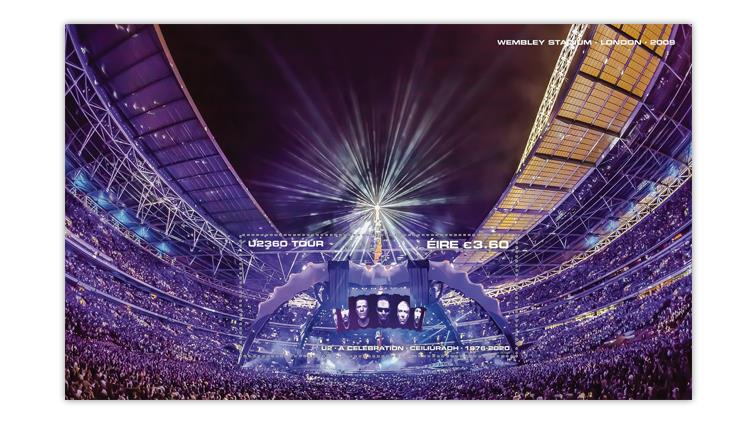 The single-stamp souvenir sheet from the new U2 stamp set shows a panoramic view of Wembley Stadium in London during the group’s 2009 tour. 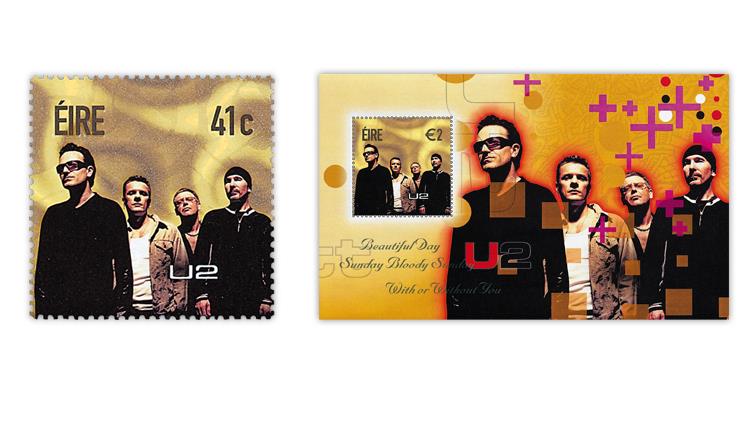 U2 was first honored by An Post in 2002 as part of a set honoring Irish rock bands. Two stamps celebrating U2 were issued with the same design but with different denominations. 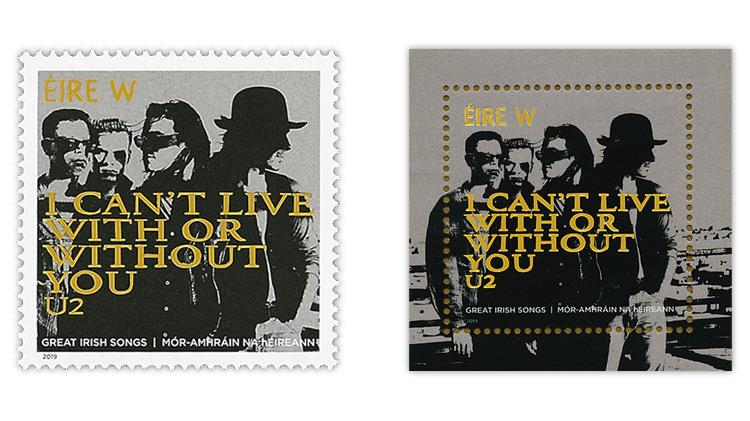 An Post issued stamps in 2019 highlighting lyrics from Irish songs. U2 was part of this issue as well, with two similar stamps that have lyrics from With or Without You superimposed.
Previous
Next

An Post, the postal provider of Ireland, issued a set of four stamps and one souvenir sheet Oct. 15 to honor the world famous rock band U2.

The four-man group was formed in Dublin in 1976 and has since achieved enormous international success with 14 studio albums, 22 Grammy awards and induction into the Rock and Roll Hall of Fame.

According to An Post, “the four-stamp set represents distinct eras in U2’s musical journey through four of the band’s most memorable albums: The Joshua Tree (1987), Achtung Baby (1991), All That You Can’t Leave Behind (2000) and Songs of Experience (2017).”

The €5.40 booklet of four nondenominated self-adhesive stamps contains two N-rate (€1) stamps for standard mail within Ireland and two W-rate (€1.70) stamps for worldwide letter mail. Both the N and W stamps fulfill payment for mail not exceeding 100 grams in weight (about 3½ ounces).

The same four stamps are also available in a small pane described by An Post as a miniature sheet. The pane measuring 150 millimeters by 90mm (about 5.9 inches by 3.55 inches).

The four stamps are each processed in a different geometric shape and printed by lithography with hot foil application in gold or silver.

Each stamp illustrates a central graphic element for the album it represents. The square W stamp for U2’s fifth studio album, The Joshua Tree, shows the desert-friendly Joshua tree in gold silhouette before the rays of the sun. The stamp background is black.

Just weeks after The Joshua Tree was released on March 9, 1987, the group was pictured on the cover of TIME magazine with the caption “Rock’s Hottest Ticket.” The album produced the two U2 singles that have charted No. 1 in the United States, I Still Haven’t Found What I’m Looking For and With or Without You, and won the Grammy award for album of the year.

The round N stamp for Achtung Baby shows a cartoonlike baby’s face superimposed on a background of a gold star created from circles.

“The iconic achtung ‘baby’ on the stamp was originally spray painted on the wall of Windmill Lane, where the band recorded much of their early songs and albums,” An Post noted.

Mysterious Ways is just one of the singles from Achtung Baby.

The pale gray W stamp for All That You Can’t Leave Behind is also square, but oriented in a diamond position, with its icon of a suitcase with a heart inside of it superimposed over lyrics from the song Walk On. The album’s title is taken from the first verse of the song.

Some U2 fans might recognize the suitcase-and-heart icon from its appearance as a graphic within one of the 20th anniversary boxed sets of the album released just a few weeks ago.

Songs of Experience, the group’s most recent studio album, is represented by a seven-sided (heptagonal) N stamp in gradient radiating shades of blue.

The white silhouette in the stamp’s center of a young man and woman holding hands was previously featured on the CD release of the 2017 album. The image is adapted from the album’s cover photograph, which shows Eli Hewson (Bono’s son) and Sian Evans (the Edge’s daughter) in that same pose.

Each stamp includes the inscription “A Celebration • Ceiliuradh • 1976-2020” plus the band’s name and the name of the album represented. Ceiliuradh is the Gaelic word for Celebration.

“Capturing the career of one of the world’s greatest rock bands on the tiny canvas of a stamp required expert design,” An Post stated in publicity material announcing the new set. “With input from the band, An Post worked with U2’s Creative Director Gavin Friday, as well as graphic designer Shaughn McGrath, to develop four concepts inspired by the band’s extensive album catalogue. Each stamp has a different shape and range of print finishes to capture the evolution of the band over four decades.”

Unlike the four other stamps, the souvenir sheet in this set is perforated and has a traditional moisture-activated adhesive. It contains a single rectangular €3.60 stamp showing an image of the 2009 U2 360 Tour at London’s Wembley Stadium. The photograph that extends across the stamp and souvenir sheet was taken by Ralph Larmann.

Members of U2 can be discerned as tiny figures on the stage in the souvenir sheet margin selvage (below the actual stamp), but on the stamp their faces are shown enlarged upon a cylindrical screen above the stage.

The stamps were printed by Royal Joh. Enschede.

U2’s bassist Adam Clayton was quoted by An Post as saying, “In a year with so many restrictions, it’s fun to think that we can travel from our homes in Ireland to anywhere in the world, courtesy of An Post.”

Garrett Bridgeman, managing director of An Post Mails and Parcels, said, “For fellow lifelong U2 fans and admirers of Irish design, it’s a great pleasure to announce these very special stamps celebrating the remarkable global impact of U2 since their formation in 1976. This stamp issue also acknowledges the band members’ massive impact on global culture and society, from their work on climate change to social justice and more recently, here in Ireland with their response to the nation’s fight against COVID-19.”

An Post also is offering two first-day covers postmarked Baile Atha Cliath (Dublin); one for the four individual stamps, and the other for the panoramic souvenir sheet.

The four-stamp FDC is an envelope with an all-over cachet picturing the group performing in their early days at Dublin’s popular Dandelion Market. The photo is by Colm Henry.

The new set marks the third time An Post has honored U2 on postage stamps.

A set honoring Irish rock musicians issued Oct. 17, 2002, included similar 41¢ and €2 stamps (Scott 1435 and 1439, respectively) showing the band members standing before a gold background. The €2 stamp was issued in a souvenir sheet of one.

Also honored in this set were Phil Lynott, Van Morrison and Rory Gallagher.

A set of four stamps titled Great Irish Songs was issued May 2, 2019, highlighting lyrics from songs performed by Irish musicians.

At the same time, a souvenir item including a small pane of one stamp was issued; the stamp differs slightly from the regular issue because it does not have a white frame around the design.

The souvenir pane for the 2019 issue is noted but not listed in the Scott Standard Postage Stamp Catalogue.