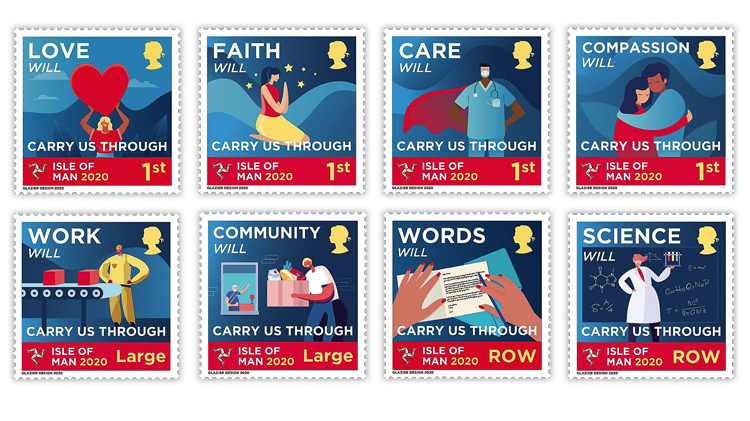 The Isle of Man issued a set of eight stamps May 4 in response to the coronavirus COVID-19 pandemic. The Isle of Man Post Office describes this set as “highlighting the message that love, faith, care, compassion, work, community, words and science will #C

Called Carry Us Through, this set of eight nondenominated stamps was issued May 4. A donation from the sale of the stamps will be made to the Manx Solidarity Fund, a charity established in response to the pandemic.

Maxine Cannon, general manager of Isle of Man Stamps and Coins, said: ‘‘By replacing our normal stamps with these beautifully illustrated tributes, we hope to play our part in thanking the people who #CarryUsThrough and raise the morale of everyone that receives them.

“The stamps also proudly display the three legs of Man, its meaning — ‘Whichever way you throw us, we will stand.’ That motto summarises the Manx spirit and the determination of Manx people to fight on through this crisis.”

She also thanked the team at Glazier Design “for their superb work at such short notice and creating a theme that is uplifting.”

The stamp designs illustrate the message that love, faith, care, compassion, work, community, words and science will carry us through this and other difficult times.

Each stamp includes a different word in the upper left with the word “Will” below it.

For example, one of the four first-class stamps in the set is inscribed “Love” in the upper left. The design shows a woman holding a large symbolic heart above her head. The phrase “Carry Us Through” is inscribed at the bottom of the illustration.

On the other three first-class stamps, “Faith” is represented by an image of a woman praying, “Care” is symbolized by a medical worker wearing a red superhero cape, and “Compassion” by a couple hugging each other.

The two stamps for large letters are inscribed “Work” and “Community,” respectively.

The Isle of Man Post Office said of the Work stamp: “The Government has asked us to work to save our country. Workers from a great variety of expertise have joined in the effort to make healthcare equipment. Without their efforts we would be lost.”

The Community stamp shows a man delivering groceries to an elderly man.

The final two stamps in the Carry Us Through set pay the international rate, indicated by “ROW” for “rest of the world.”

A person writing a letter is depicted on the stamp with “Words” in the upper left.

The other stamp is inscribed “Science,” and the design features a scientist in a lab coat holding test tubes. The chalkboard behind the scientist includes equations and a sketch of molecules.

The Isle of Man Post Office said: “We have represented all the main fields of science (Biology, chemistry, physics and maths) and by kind permission of Dr. Lucy Hawking, included two of Professor Hawking’s equations.”