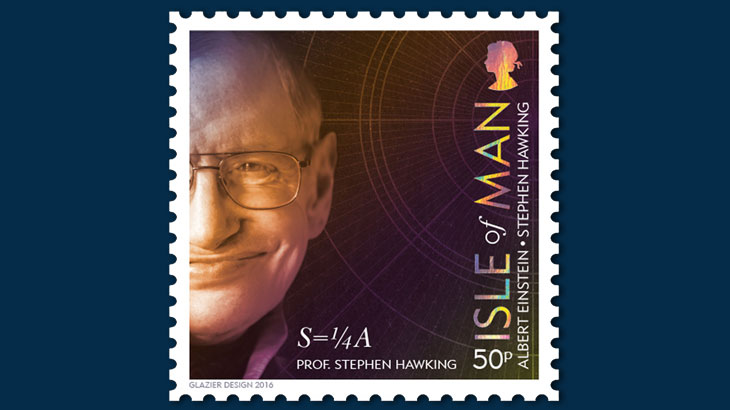 As the world mourns the loss of renowned scientist Stephen Hawking today, the Isle of Man Post Office offers condolences and remembers his achievements.

Hawking died at his home in Cambridge, England the morning of March 14, the University of Cambridge confirms. He was 76 years old.

In the wake of his passing, Isle of Man Post Office recalls the privilege of recording the physicist’s accomplishments on postage stamps in July 2016. The Albert Einstein to Stephen Hawking — 100 Years of General Relativity stamps and products highlight the work of Einstein and Hawking, featuring some of the most significant equations from the past century. (To learn more about the set of six stamps, including the theories they depict, see Isle of Man stamps honor Albert Einstein and Stephen Hawking.)

The Isle of Man Post Office reports Hawking had displayed the stamps in his living room.

“Much of my life’s work has been to encourage young people in the study of cosmology and astrophysics and to help inspire them to better understand our universe and beyond,” Hawking said when seeing the final set. “I hope that this unique set of stamps goes some way towards achieving this.”

Hawking endorsed the set at the June 2016 Starmus science festival in the Canary Islands.

The Isle of Man Post Office collaborated with Glazier Design, The Stephen Hawking Foundation, Greenlight (the authorized representative of the Albert Einstein estate) and actor Eddie Redmayne to bring these stamps to fruition. For more information, head to the IOMPO website.