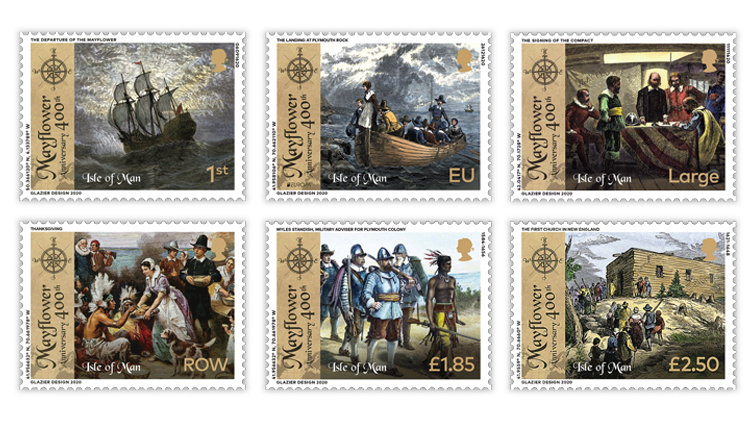 The Isle of Man commemorates the 400th anniversary of the Mayflower on this set of six stamps showing key events associated with the 1620 voyage and the Plymouth Colony. The £1.85 stamp honors the colony’s military commander Myles Standish, who was born o

A set of six stamps from the Isle of Man commemorates the 400th anniversary of the Mayflower’s voyage to the New World.

The stamps are scheduled to be issued April 22 in separate panes of 10.

In announcing the stamps, the Isle of Man Post Office said on its website: “2020 marks 400 years since the Mayflower set sail from Plymouth, UK … The ship has become a cultural icon in the history of the United States and more than 30 million people can trace their ancestry back to the 102 passengers and approximately 30 crew aboard the Mayflower when it landed in Plymouth Bay, Massachusetts. These individuals would go on to greatly influence the future of the United States of America."

The set begins with a nondenominated first-class stamp inscribed “The Departure of the Mayflower.” The ship departed Plymouth, England, Sept. 6, 1620, and this location is pinpointed by the latitude and longitude coordinates (reading up) in the lower left.

Each stamp includes different coordinates to indicate the location of the event pictured in the design.

The landing at Plymouth Rock is featured on the nondenominated “EU” stamp for use on letters send to European countries. This stamp is part of the multination Europa series with the theme of ancient postal routes, and it is being issued in a special pane of 10 with a decorative border.

The third stamp shows the signing of a compact onboard the ship on Nov. 11, 1620.

Later known as the Mayflower Compact, this document was signed by the 41 men on the ship to “establish a rudimentary form of democracy, with each member contributing to the welfare of the community,” according to the Isle of Man Post Office.

In place of a denomination, this stamp is inscribed “Large,” and it pays the rate for mail that is larger than the standard size.

The fourth stamp is for international mail, and its “ROW” inscription stands for “rest of the world.” The design shows the Pilgrims and Wampanoag at a harvest feast often described as the “first Thanksgiving.”

The £1.85 stamp features Myles Standish, the Plymouth Colony’s military advisor. Standish is also the Manx connection to the Mayflower; he is believed to have been born around 1593 in Ellenbane on the Isle of Man.

Standish’s birthplace and the Mayflower are pictured on stamps issued by the Isle of Man in 1986 in conjunction with the Ameripex international philatelic exhibition (Scott 308-311).

The last stamp in the new set, denominated £2.50, is inscribed “The First Church in New England.” This building in the Plymouth Colony reportedly also served as a fortress.