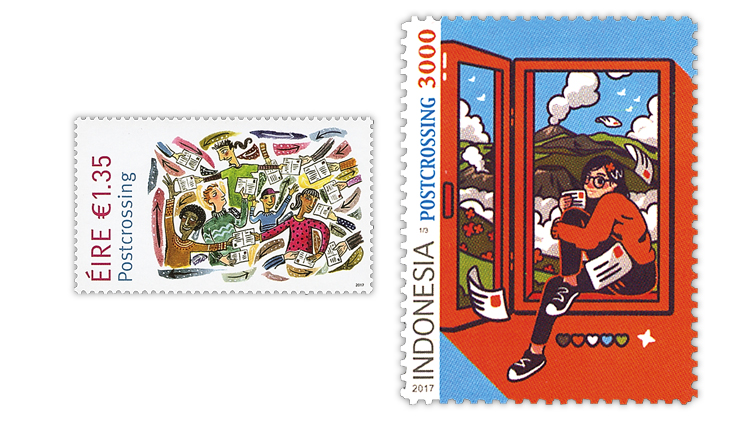 It’s summer and for many that means holidays, travel and perhaps time to work on a stamp collection.

When I am traveling, I enjoy sending postcards to friends and family, and I’m sure others do, too.

If you haven’t heard about the website Postcrossing.com, I encourage you to check it out.

According to the website, “The goal of this project is to allow anyone to send and receive postcards from all over the world!”

After setting up an account, you can send postcards to random individuals around the world, and in exchange you will receive postcards back from different random people. The website provides further information detailing how this postcard-exchange system works.

I joined Postcrossing in 2010, and since then I have received postcards from China, Germany, Japan, Finland, Hungary, Russia, Thailand and other countries. It is also a great way to receive usages of recent stamps from around the world.

Pictured with this column are two such commemorative stamps issued by Ireland and by Indonesia in 2017.

The 3000-rupiah Postcrossing commemorative stamp from Indonesia (Scott 2467a) depicts a girl sitting on a windowsill with a postcard in her hand and with additional postcards floating around her. The stamp is part of a se-tenant strip of three (2467). The issue also includes a 10,000r souvenir sheet (2468).

Reports about the different Postcrossing stamps, starting with the first issued by the Netherlands, are presented in the blog section of the website.

Postcrossing was started in 2005 by Paulo Magalhaes, a student in Portugal at the time. As of July, more than 52 million postcards have been received by users on the website.

If you have an interesting Postcrossing story to share, send an email to me at jbigalke@amosmedia.com or write to my attention, Linn’s Stamp News, Box 4129, Sidney, OH 45365.