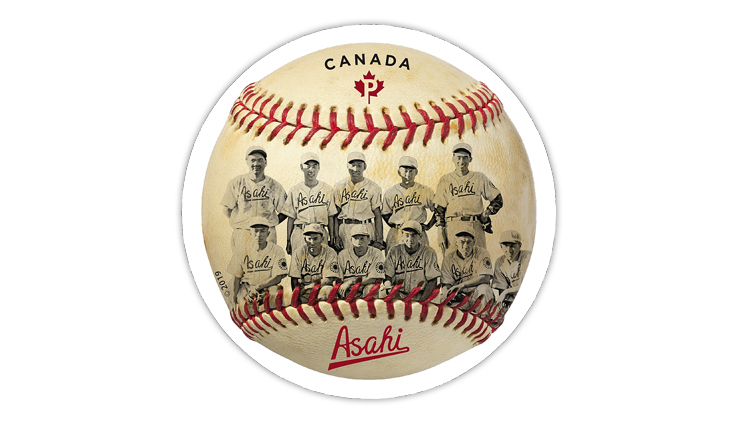 Canada Post’s stamp commemorating the Japanese-Canadian baseball team the Vancouver Asahi is shaped like a baseball and resembles one as well. The photograph depicted on the stamp shows the team in 1940. 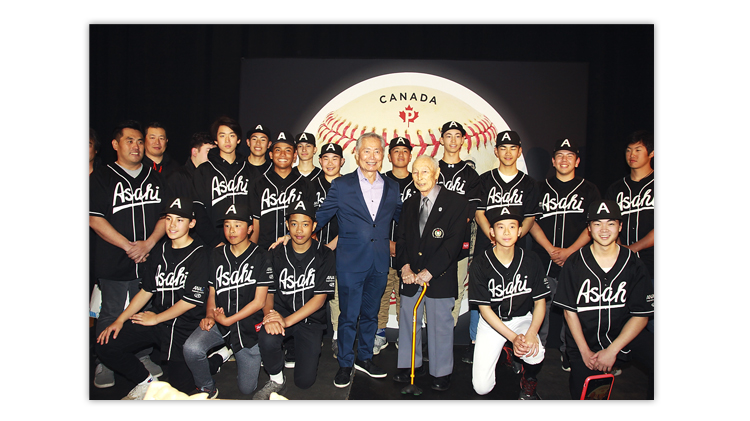 Participating in the April 24 unveiling of Canada’s Vancouver Asahi stamp were American actor and activist George Takei (shown in the center on the left); Kaye Kaminishi, the last surviving member of the team (center on the right), and players of the Asah 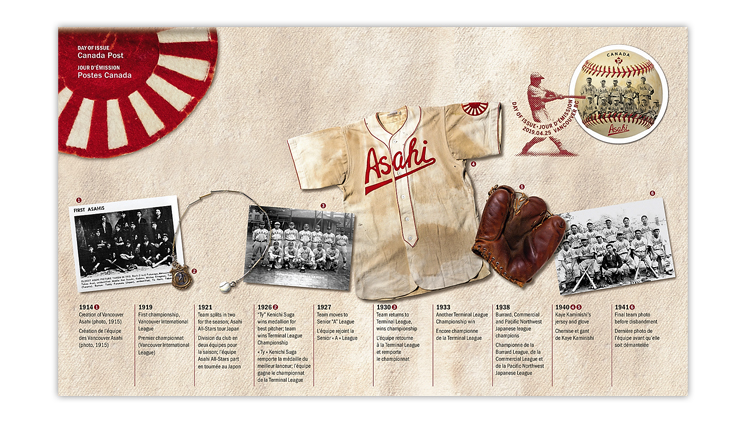 Canada Post’s official first-day cover for the Vancouver Asahi stamp features a pictorial baseball-themed cancel from Vancouver, British Columbia, and a time lime of the team from 1914 through 1941.
Previous
Next

A Canadian stamp shaped like and resembling a baseball was issued April 25 to honor an "amateur Japanese-Canadian baseball team that helped remove racial barriers through sport."

The team named Asahi, Japanese for "morning sun," was established in 1914 in Vancouver, British Columbia. The team played its last game in 1941. In 1942, Canada interned more than 20,000 Japanese-Canadians, including the Vancouver Asahi team members.

Carla Qualtrough, minister of Public Services and Procurement and Accessibility and who is responsible for Canada Post, said: "Canada’s forcible confinement of Japanese-Canadians during the Second World War remains one of the most tragic events in Canadian history. This stamp reflects the Asahi’s determination to overcome racism and discrimination through the power of sport. Asahi players exhibited integrity, honour and fair play and were shining examples of what it means to be truly Canadian."

The nondenominated permanent-rate (currently 90¢) stamp was unveiled April 24 at the Nikkei National Museum and Cultural Centre in Burnaby, British Columbia.

Kaye Kaminishi, a third baseman and the last surviving member of the Vancouver Asahi, helped unveil the stamp, as did American actor George Takei, who is best known for his role as Sulu in the Star Trek television series in films. Takei was in a U.S. internment camp as a child.

Also participating in the ceremony were players for the Asahi Baseball Association, which was created in part as a tribute to the Vancouver Asahi.

The stamp depicts a photograph of 11 players from the 1940 Vancouver Asahi team. Kaminishi, who is now 97, is second from the left in the back row in the photograph.

The stamp design shows the red stitching of a baseball above and below the photograph. Canada Post and the "P" inside a maple leaf (designating that it is a permanent-rate stamp) are at the top of the design, with "Asahi" in red at the bottom.

Subplot Design Inc. of Vancouver designed the stamp, using the team photograph courtesy of the Nikkei National Museum and a vintage baseball courtesy of Canada’s Sports Hall of Fame.

The stamp measures 30 millimeters by 30mm.

Colour Innovations printed it by five-color lithography, plus varnish, in a booklet of 10. A total of 150,000 booklets were printed.

Kaminishi and two other Vancouver Asahi team members — George Yoshinaka and Koei Mitsui — are pictured on the booklet cover.

Illustrated in the selvage of the booklet pane is an old map of downtown Vancouver. A red dot marks the location of Oppenheimer Park on Powell Street, where the team played its home games.

A ticket for the Aug. 3, 1940, Pacific Northwest Baseball Championship Game played in Seattle, Wash., also is displayed in the selvage. According to the Western Canadian Baseball website (www.attheplate.com): "Pounding the offerings of four hurlers for 13 hits, the Vancouver Asahis won the first game of their Northwest Nippon baseball series at Athletic Park by drubbing the Seattle Giants 19 to 10 in a free-swinging match."

The image of the ticket has been modified to include technical information about the Vancouver Asahi stamp.

Canada Post is offering 7,000 official first-day covers bearing an April 25 pictorial cancellation from Vancouver showing a swinging batter. The cachet on this FDC presents a pictorial time line of the team from 1914-41.

In 2011, a commemorative plaque was installed at Oppenheimer Park. It reads:

"Between 1914 and 1941, at a time when Japanese Canadians faced racism, Vancouver’s Asahi Baseball Team thrilled fans by winning championships in senior amateur leagues. Its signature offensive strategy, ‘brain ball,’ emphasized bunting and speed on the bases, reflected the values of discipline and team work, and, coupled with a sparkling defence, levelled the playing field with more powerful opponents. The Asahi became a symbol of the Japanese-Canadian struggle for equality and respect, and despite being disbanded during the Second World War internment, left a legacy of inspiration for future generations."