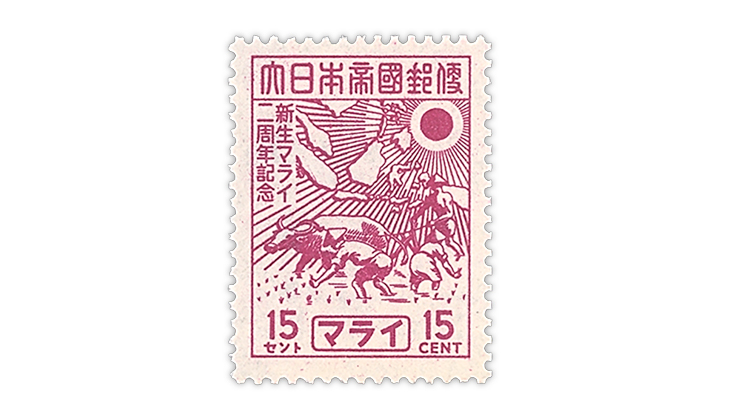 The Japanese occupiers of Malaya issued a set of two stamps Feb. 15, 1944. The set is a good buy at full Scott catalog value.

British Malaya (1826-1957) was a protectorate on the Malay Peninsula and the island of Singapore comprising the Straits Settlements (under direct British colonial rule), the Federated Malay States (Pahang, Perak, Negeri Sembilan and Selangor) and the Unfederated Malay States (Johor, Kedah, Kelantan, Perlis and Terengganu).

Malaya issued its first stamps in 1900, but all its component states also issued their own stamps.

Japan issued occupation stamps for Malaya as well as for most of its component parts.

Japanese occupation stamps of Malaya are of interest to collectors of the British Empire and of Japan.

The design of the stamps shows Malayans planting rice in the foreground with a map of Malaya in the background.

While this set is not scarce, it is also not particularly easy to find. A lightly hinged set in very fine grade is a good buy at full Scott catalog value.