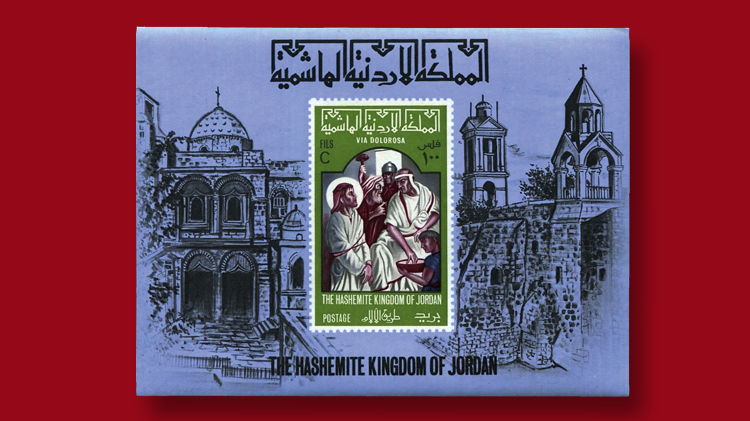 The Jordan 100-fils souvenir sheet of one (Scott 531N) issued as part of the 1966 Stations of the Cross set is in demand and hard to find.

The Hashemite Kingdom of Jordan lies on the east bank of the Jordan River bordered by Israel, Saudi Arabia, Iraq and Syria. In biblical times it, comprised the kingdoms of Moab and Edom.

Formerly a province of the Ottoman Empire, it was administered by Great Britain as a League of Nations mandate territory known as Trans-Jordan after World War I. It became an independent kingdom in 1946.

On Sept. 14, 1966, Jordan issued as set of 14 Stations of the Cross on the Via Dolorosa stamps (Scott 531-531M) and an imperforate souvenir sheet of one 100-fils stamp (531N). The stamps are readily available, but the souvenir sheet is harder to find.

The stamp in the souvenir sheet depicts Jesus being questioned by Pontius Pilate who is about to wash his hands and send Jesus to the Cross. Pilate, the fifth prefect of the Roman province of Judea, was in office from 26 to 36 A.D.

In addition to being popular with collectors of religion on stamps because it is a rare depiction of a Roman prefect, this souvenir sheet is also in demand by Old World archeology and Roman Empire topical collectors.