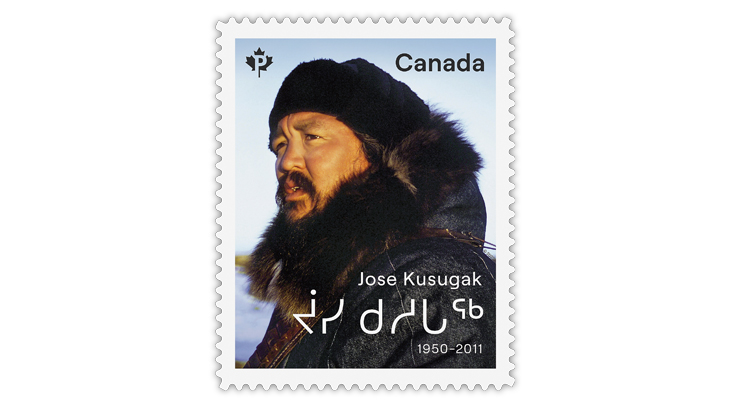 Canada Post unveiled the Indigenous Leaders stamp commemorating Jose Kusugak June 14 at an event on the Rankin Inlet in the Nunavut territory. The stamp is part of a set of three to be issued June 21.

On June 14, Canada Post unveiled a stamp honoring Jose Kusugak on the Rankin Inlet in the Nunavut territory. The stamp will be issued June 21 in a new series that pays tribute to the lives and legacies of Indigenous leaders.

In addition to Kusugak, the first set in the series will feature Harry Daniels and Chief Marie-Anne Day Walker-Pelletier. All three will be issued June 21, National Indigenous Peoples Day in Canada, but are being unveiled at separate events this week.

Canada Post unveiled the stamp commemorating Daniels June 13 at an event in Regina, Saskatchewan, and the stamp honoring Day Walker-Pelletier will be unveiled June 15 in Fort Qu’Appelle, Saskatchewan.

Part of the first generation of Inuit children sent to residential schools, Kusugak (1950-2011) dedicated his life to raising awareness about Inuit identity as well as promoting and preserving Inuit language and culture, according to Canada Post.

An Inuit activist, linguist and broadcaster, Kusugak played a critical role in the efforts leading to the creation of Nunavut in 1999.

According to Canada Post, that role has led some to consider Kusugak a Father of Confederation, a designation similar to Founding Father in the United States.