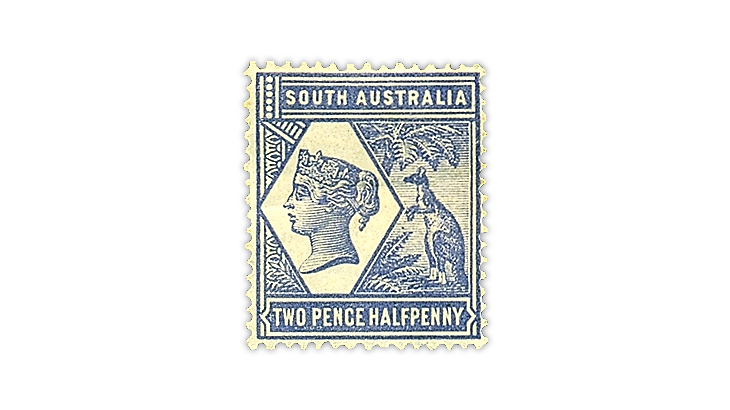 The British province of South Australia was established in 1834. In 1842, it became a crown colony.

It is the only Australian state never to have received transported prisoners as settlers. The former colony joined the other Australian states to form the Commonwealth of Australia in 1901. South Australia issued postage stamps from 1855 to 1912.

There is one stamp design that is also popular with fauna and flora topical collectors. The design of the 2½-penny stamps features a cameo of Queen Victoria to the left and a kangaroo and palm tree to the right. This design was used on stamps listed as Scott 102, 107, 117, 135 and 147.

The Scott Classic Specialized Catalogue of Stamps and Covers 1840-1940 values the stamp at $45 in unused, original gum condition. The stamp is a good buy in very fine grade at $40 or more. For an example in fine-very fine grade, expect to pay $30 or more.

Australian States stamps of this period are notorious for their centering. The design takes up most of the front of the stamp with very little left over for the margins. Examples where the perforations do not touch the frame of the design are considered to be in very fine grade.