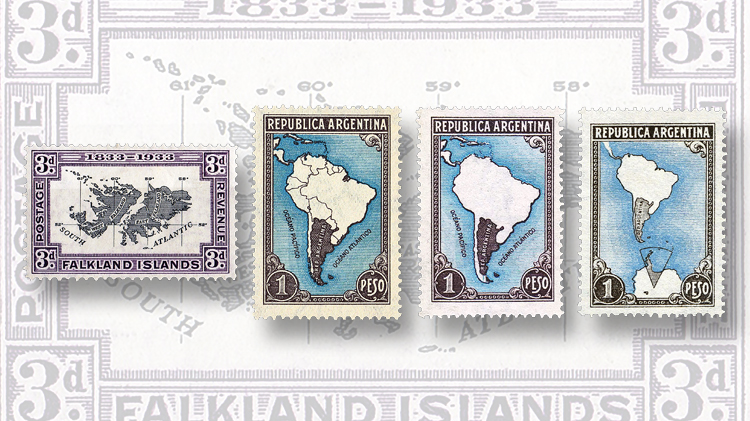 After Falkland Islands issued a dozen stamps like the one at left (Scott 69) celebrating a century of British administration in 1933, Argentina replied in 1936 with a 1-peso stamp picturing the Falklands as part of its domain (445), repeating the insult on a second borderless version in 1937 (446). After postwar stamps of Great Britain laid claim to part of the Antarctic, Argentina modified its Map design, shown at right, to do likewise (594).

Controversial Map stamps and stamps that misidentify a military strongman are part of a lengthy stamp series issued by Argentina from 1935 to 1951. That story and numerous others await you in the Sept. 18 issue of Linn’s Stamp News monthly that will go in the mail to subscribers Tuesday, Sept. 5, instead of Monday, Sept. 4, because of the Labor Day holiday. If you’re a digital subscriber, you get early access Saturday, Sept. 2. To tide you over until your copy arrives, we offer this trio of teasers.

In this month’s Spotlight on Philately column, Fred Baumann explores Argentina’s Proceres y Riquezas definitive series that began in 1935. One translation of this series title is "heroes and riches," because the stamps show a variety of men who can be considered heroes and also depicts some of the country’s agriculture and scenic riches.

“Marzocco,” the watchful crowned lion and symbol of Florence, was chosen as the central figure for the first stamps issued by the Grand Duchy of Tuscany — a set of nine denominations. Sergio Sismondo provides sage advice on collecting this issue in Unveiling Classic Stamps.

Now a United States territory, the U.S. Virgin Islands were once owned by Denmark and known as the Danish West Indies. Stamps issued under Danish rule were in use from 1855 to 1917. In this month’s Nordic Stamp Scene, Christer Brunstrom discusses this period in stamps.

The single hot stamp from Jasdan, Children’s Health semipostals are no more: Inside Linn’s