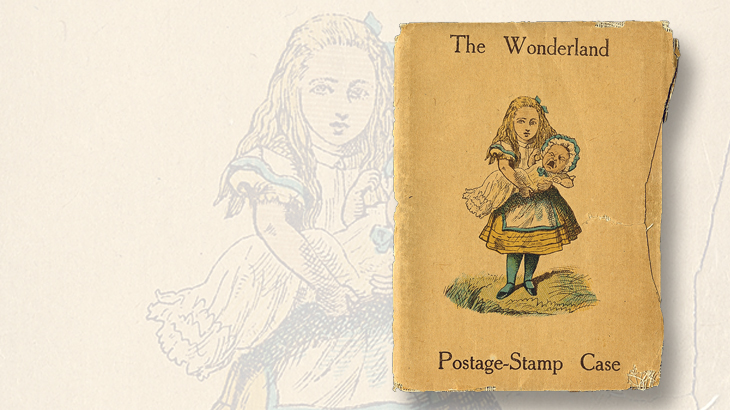 The front of the slipcase for the stamp case has an illustration of Alice from the book, holding a crying child. Image courtesy of Florence Becker Lennon Papers, MS38, Special Collections & Archives Dept., University Libraries, University of Colorado-Boul 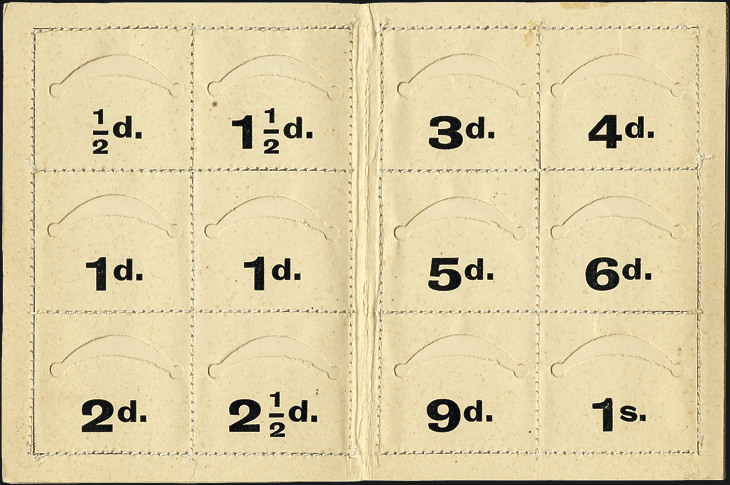 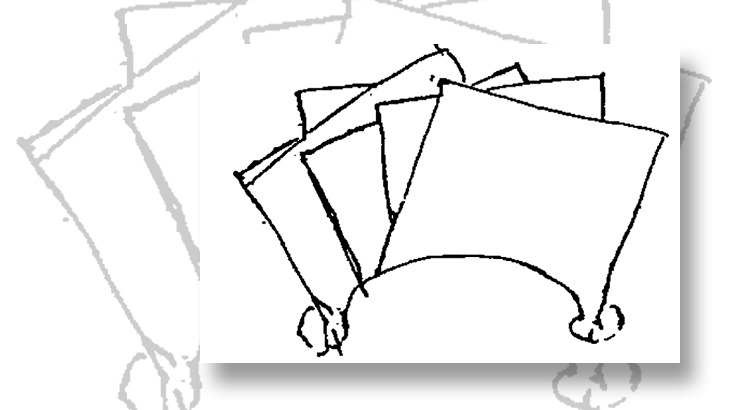 Carroll sent a stamp case to a friend in 1890 with a sketch of how to place the stamps in the pockets: “best arranged bouquet-wise.” 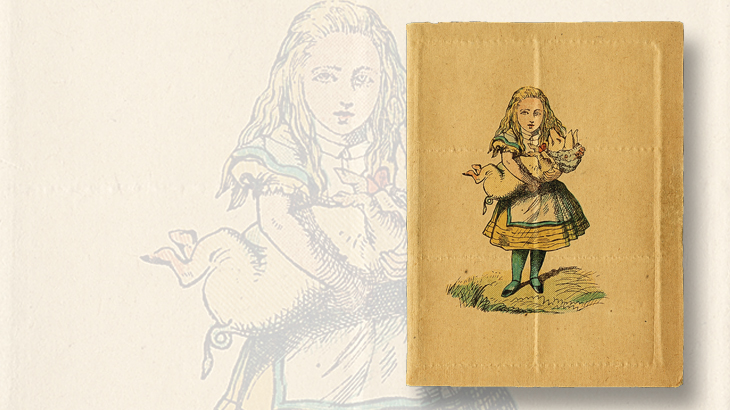 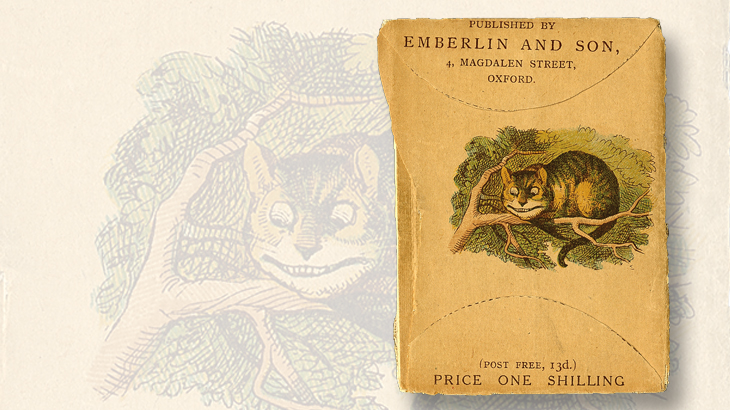 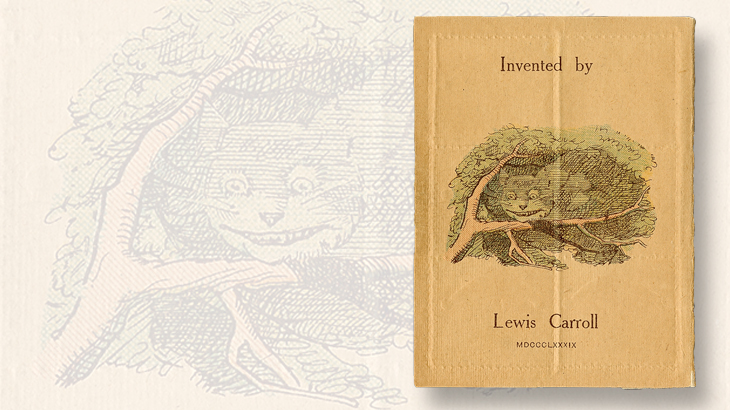 The back of the stamp case shows the Cheshire Cat fading, except for its famous smile. Image courtesy of Florence Becker Lennon Papers, MS38, Special Collections & Archives Dept., University Libraries, University of Colorado-Boulder. 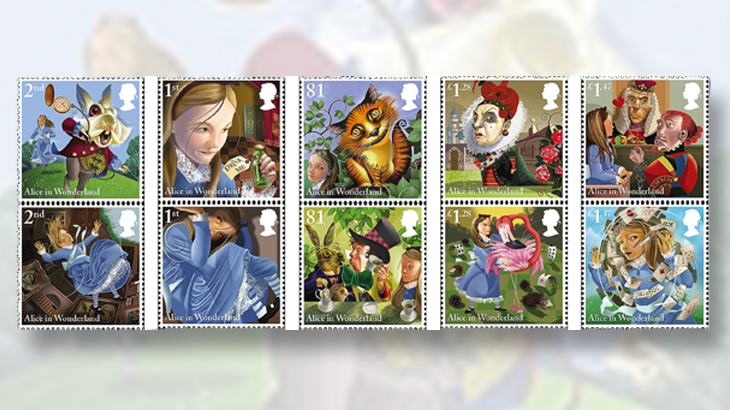 Great Britain’s marked the 150th anniversary of the publication of Alice’s Adventures in Wonderland with a set of 10 stamps on Jan. 6, 2015.
Previous
Next

Considerable attention was devoted during 2015 toward marking the 150th anniversary of perhaps the world’s best-known children’s book, Alice’s Adventures in Wonderland.

Lewis Carroll’s ingenious tale of Alice’s fall down a rabbit hole and her resulting escapades in Wonderland has captivated the world since it first appeared in 1865, and subsequently was translated into as many as 175 languages.

For its part, Britain’s Royal Mail commemorated the anniversary with a set of 10 stamps on Jan. 6, 2015. More recently, the British Library opened an exhibit last Nov. 20 on Alice in Wonderland that will run until April 17 this year. Among the memorabilia on display is one item of particular interest to the philatelic community.

Although not a collector himself, Lewis Carroll (the pen name of Charles Lutwidge Dodgson) was a prolific correspondent, keeping meticulous records on some 100,000 letters that he had written and received over the years. Handling that volume of mail made him vividly aware of the need for a handy supply of postage stamps.

Consequently, in 1890 — some 25 years after Alice’s first adventures were published — Carroll presented “The Wonderland Postage Stamp-Case,” which he promoted both for its utility and also to help market his books to the buying public.

“The stamp case is another example of Carroll’s involvement with merchandising developed around the Alice books,” the British Library notes in its exhibit.

The Wonderland Postage Stamp-Case is similar to a small stock book, approximately three inches by four inches in size when folded, and containing 12 pockets designed to hold stamps of various denominations of the day. The cardboard slipcase enclosing the stamp case shows Alice holding a wailing child. When the stamp folder is slid from its slipcase envelope, the crying baby is replaced by a sulking pig — the Pig Baby character in the book.

The back of the slipcase shows the grinning Cheshire Cat along with the name of the publisher, Emberlin and Son in Oxford, and the 1-shilling sales price. The back of the stamp case lists Carroll as the inventor with the image of the Cheshire Cat fading into the background, leaving its grin still prominently in view.

Carroll called the Cheshire Cat illustrations his “Pictorial Surprises,” stating that, “If that doesn’t surprise you, why, I suppose you wouldn’t be surprised if your own Mother-in-law suddenly turned into a Gyroscope!”

That quotation came from Carroll’s Eight or Nine Wise Words about Letter-Writing, an essay and marketing pamphlet containing his advice about composing, writing, mailing and recording letters, but also mentioning that he invented the stamp case because of “constantly wanting Stamps of other values, for foreign Letters, Parcel Post, etc., and finding it very bothersome to get at the kind I wanted in a hurry.”

Carroll advised how to set up the stamp case: “Each of the pockets will hold 6 stamps, comfortably. I would recommend you to put them in, one by one, in the form of a bouquet, making them lean to the right and to the left alternately: thus there will always be a free corner to get hold of, so as to take them out, quickly and easily, one by one: otherwise you will find them apt to come out two or three at a time.”

Carroll mailed a stamp case to a friend, F.H. Atkinson, in April 1890, including his sketch of how to arrange the stamps.

“Stamps are best arranged bouquet-wise: then you can take them out, easily, one by one,” Carroll advised Atkinson.

Carroll recorded in his diary that he invented the stamp case on Oct. 29, 1888. However, he encountered difficulties in finding a stationer who would produce it, and so it did not go on sale until July 2, 1890. In succeeding years, there were at least three printings of the stamp case and as many as eight editions of Eight or Nine Wise Words about Letter-Writing.

Carroll often made a gift of his invention to friends. In fact, the stamp case figured in what may have been his last meeting with the young woman, Alice Liddell, who at age 10 had asked Carroll to tell her and her siblings a story during a family picnic in 1862. The tale eventually was written down by Carroll and presented to the model for the character of Alice as a Christmas gift in 1864. That version was titled Alice’s Adventures Under Ground.

Carroll met with Alice Liddell Hargreaves, as she was then named, in 1891 in Oxford, and presented her with a stamp case that he inscribed: “Mrs. Hargreaves, from the Inventor, Dec. 9, 1891.” That was to be the last time that the original Alice’s name appeared in Carroll’s diaries.

A fortnight later, Christmas Day of 1891, a solitary Carroll recorded in his diary, “For the first time in my life, I am spending Christmas Day alone.” He was suffering from synovitis, an inflammation of the knee, and had been advised by his doctor not to travel. Carroll took a positive attitude concerning his Christmas confinement, however, noting in his diary, “My knee seems nearly well, and my enforced solitary leisure gives a grand opportunity for writing and reading. My headaches have vanished, and my full powers of work have returned. Truly, on this day of blessing to all mankind, I have many special mercies to be thankful for.”

As Lewis Carroll, Charles Dodgson produced a sequel to Alice titled Through the Looking-Glass and What Alice Found There (1871), and a lengthy nonsense poem called The Hunting of the Snark (1874), plus works of poetry, games, puzzles and fairy tales. Under his own name, as a mathematician, he published numerous scholarly works in math and logic. Charles Dodgson died in 1898, shortly before his 66th birthday.

Sources for this article include: