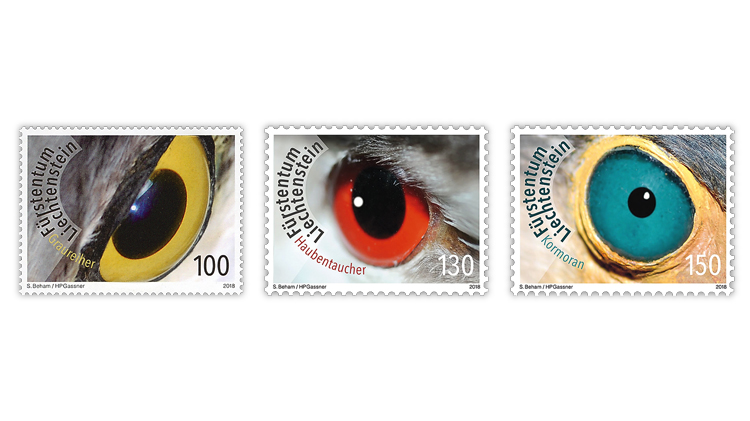 A set of three stamps from Liechtenstein won the Asiago international award for philatelic art for stamps issued in 2018. The stamps show Sven Beham’s close-up photographs of the eyes of birds. 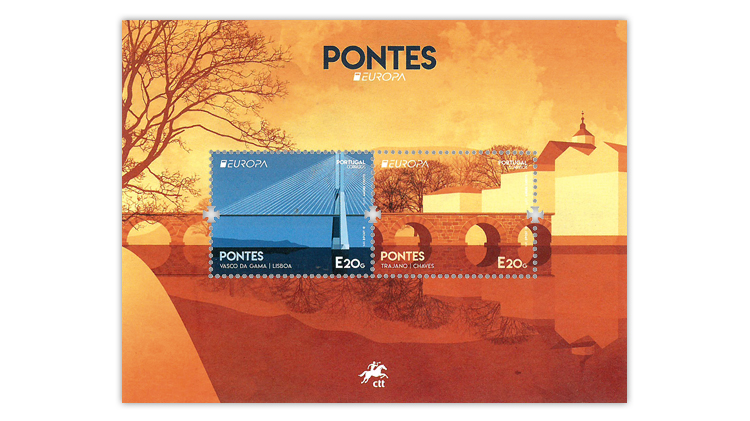 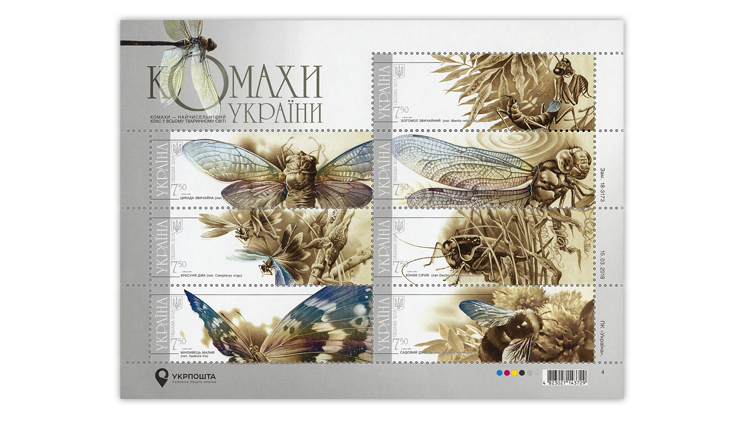 The Asiago prize for the best environmental issue was awarded to Ukraine for a pane of seven different commemorative stamps showing insects. 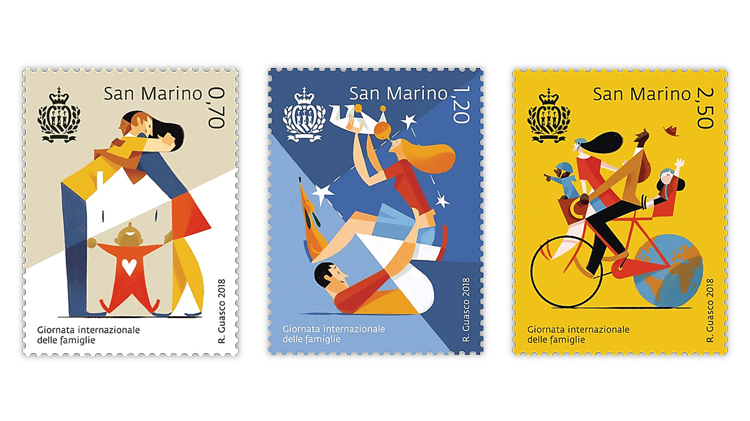 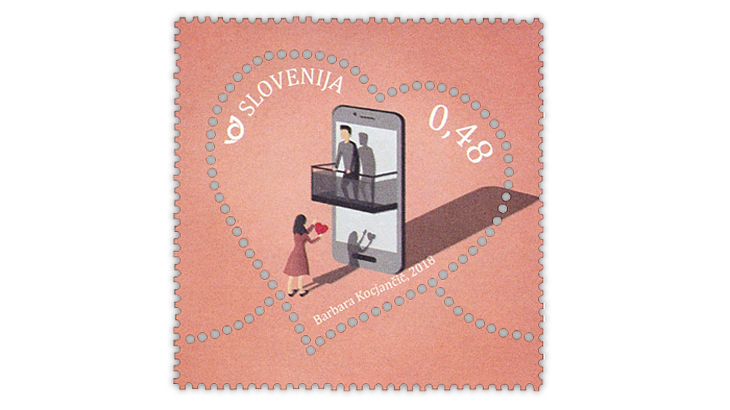 The special award from the Italian Academy of Philately and Postal History went to Slovenia’s heart-shaped Love stamp featuring a cell phone serenade.
Previous
Next

Liechtenstein won the 49th Asiago international award for philatelic art for the best stamp issue of 2018 for its set of three Artistic Photography stamps.

The jury for the Asiago awards, considered the Oscars of philatelic art, pointed out that photography can be a sublime form of art and unanimously bestowed the top award “for the idea, skill, and fascinating and colourful composition” that “take us well beyond the best photographic techniques.”

A souvenir sheet from Portugal won the award in the category of tourism. The sheet was issued May 9, 2018, part of the Europa multination series focusing on bridges, a timely theme aimed at uniting humanity rather than dividing it.

Designed by Andre Chiote, the Portuguese souvenir sheet contains two stamps, one showing an ancient bridge and the other depicting a modern one. Trajan’s Bridge at Chaves was built over the Tamega River at the end of the first century. Lisbon’s Vasco da Gama Bridge was inaugurated in 1998. Spanning the Tagus River, it is more than 10 miles long, making it the second longest bridge in Europe after the Crimean Bridge.

The jury said that Chiote adopted an “original conceptual and graphic” style for his design.

Isabel Fonseca, an official for Portugal’s post office (CTT), attended the awards ceremony. She was delighted that Portugal received the coveted prize that “rewards our constant efforts to issue stamps that are increasingly able to communicate their message.”

Asiago’s 2019 best environmental stamp prize went to Ukraine for its eye-catching pane of seven stamps featuring indigenous insects that play an often underestimated role in preserving their natural habitats. Issued July 3, 2018, the stamps were designed by S. and O. Kharuk.

The prize was presented to Roman Goriajnov, consul general of Ukraine, and consul Yevhen Shkvyra.

The special award of the prestigious Olympic Academy, established in 1555, went to a set of three San Marino stamps saluting the International Day of Families. The stamps were issued March 13, 2018. This was illustrator Riccardo Guasco’s debut in philatelic design, and he was both surprised and grateful for the honor bestowed on him.

Thiene, president of the Olympic Academy and chairman of the Asiago international philatelic art award, said that this set of stamps from San Marino project a positive and “highly symbolic value of the family” at a time when the world witnesses “a drop in births, an increase of separations of married couples” and other complex problems.

The Italian Academy of Philately and Postal History bestowed its special prize on a captivating heart-shaped Love stamp issued Jan. 26, 2018, by Slovenia. Barbara Kocjancic’s design for the stamp is a clear departure from tradition and a welcome update. The stamp shows a woman serenading her sweetheart who is standing on a virtual balcony that is popping out of a cell phone.

Filanci thanked the recipients of the awards and prizes for “having understood the importance of stamps as a means of communication by modernizing them in such a way that they become attention getters.”

The Circolo Filatelico Numismatico Sette Comuni Asiago (Numismatic and Philatelic Club of the Seven Asiago Municipalities) has been awarding the prize for the best designed postage stamp of the year since 1971, when the winners were Cuba and Austria.

Located on a plateau in northeastern Italy, Asiago is famous for its cheese and as a popular year-round tourist attraction.

Asiago’s mayor, Roberto Rigoni Stern, expressed his delight at the fact that the Municipal Hall of Paintings hosted an event that emphasized the eloquence and significance of stamps as an “international language that is not solely confined to the discharge of its duty but can also reach great heights in the realm of visual arts.”