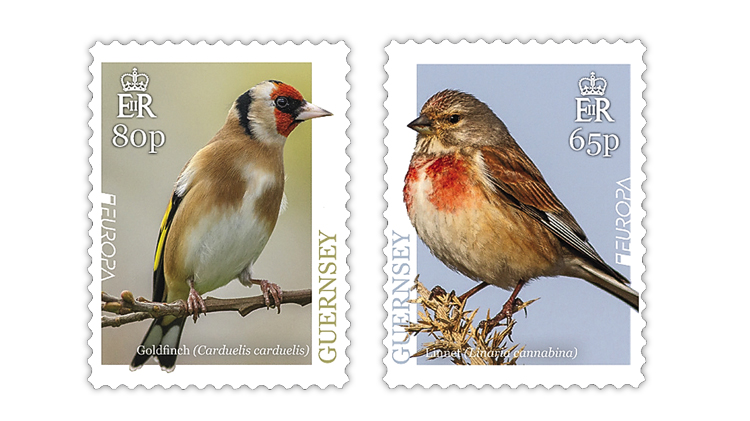 Smartphone users will be able to listen to the sounds of the linnet and goldfinch by scanning these Europa stamps to be issued April 1 by Guernsey. Other postal administrations also will offer this additional feature on their Europa stamps.

Birds will be singing on several of this year’s Europa stamps.

Each year, PostEurop, the Association of European Public Postal Operators, selects a theme for the multination Europa series. As announced in the July 10, 2017, issue of Linn’s, the theme for 2019 is birds.

However, many of this year’s stamps will do more than just show birds, they will play their songs as well through the use of a special smartphone app (application), according to a Feb. 7 newsletter from the
PostEurop Stamps and Philately Working Group.

Some postal administrations have already announced their singing bird stamps. For example, two of the six Birds stamps to be issued April 1 by Guernsey Post will include the Europa emblem and feature this app.

Bridget Yabsley, head of philately at Guernsey Post, said: “In conjunction with the PostEurop Birdproject 2019, our stamps depicting the EUROPA logo (65 pence and 80 pence) have an additional feature as they can be scanned with a smartphone using the free Cee-App to hear the sounds of the birds.”

The 65p stamp from Guernsey shows a common linnet (Linaria cannabina), and the 80p denomination depicts a goldfinch (Carduelis carduelis).

PostEurop said that additional postal administrations may participate as well.

A Netherlands’ marketing and advertising firm, Studio Excello, is working with the postal administrations participating in Birdproject 2019.