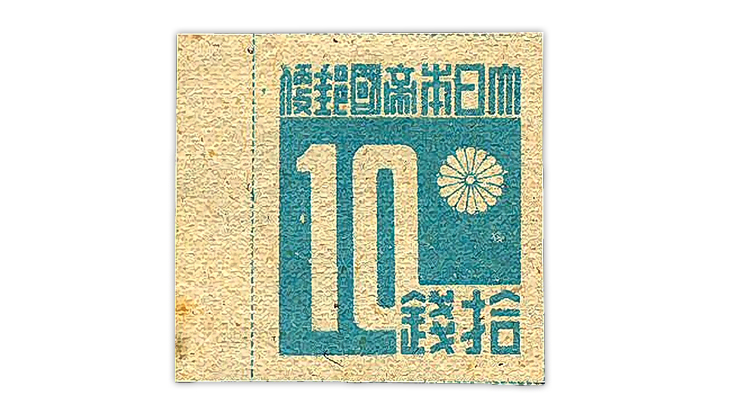 The 1945 Japan – Taiwan (Formosa) set of three Numeral of Value and Imperial Crest imperforate stamps (Scott 1-3) is a good buy in unused, no gum as issued condition at Scott Standard Postage Stamp Catalogue value or less.

Taiwan is a large island off the southeast coast of China. The Dutch, Spanish and Chinese fought for control of it until 1683 when China prevailed. The island remained a Chinese possession until the First Sino-Japanese War (1894-1895). Japan won, and Taiwan was among its territorial acquisitions.

Chinese on the island who objected to it being transferred to Japan proclaimed the Republic of Formosa and resisted the Japanese for several months until conquered in August 1895. Taiwan (known as Formosa under the Japanese) would remain a Japanese possession until 1945.

More than 300,000 Japanese were sent to colonize the island. At the end of World War II, it was returned to China, and the Japanese settlers were expelled.

By 1945 supply lines between Japan and Formosa had been cut, and Japanese stamps were no longer obtainable. A set of nine Numeral of Value and Imperial Crest imperforate stamps was produced locally, but only the 3-sen, 5s and 10s stamps were issued (Scott 1-3).

The Scott Standard Postage Stamp Catalogue values the set of three at $89 in both unused, no gum as issued condition and in used condition.

Prices realized vary widely from around 80 percent to 140 percent of catalog value. The set is a good buy at Scott catalog value or less.