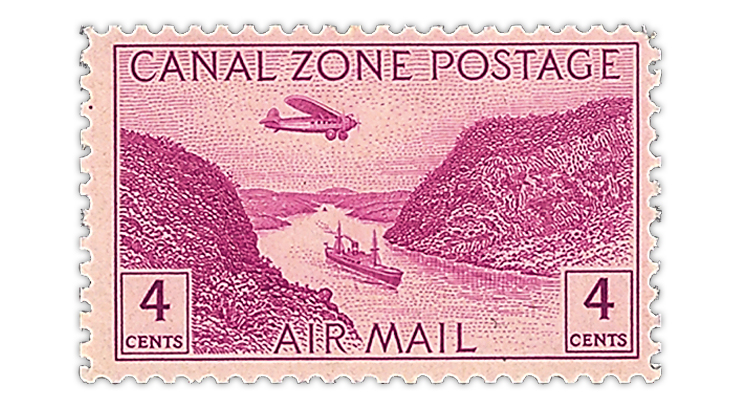 The Canal Zone, a strip of territory across the Isthmus of Panama on either side of the Panama Canal, was under the administration of the United States from 1904 to 1979. From 1979 to 1999, it was jointly administered by the United States and Panama. At the end of 1999, it reverted to Panama.

The Canal Zone issued postage stamps and operated a postal service under the administration of the United States from 1904 to 1979. These stamps are popular with many U.S. collectors.

The U.S. administration issued a series of nine Canal Zone airmail stamps from 1931 to 1949 (Scott C6-C14). The stamps show a wing-above-the-fuselage monoplane flying over a cargo ship passing through the Galliard Cut of the Panama Canal.

The engraved stamps were printed on unwatermarked paper by the U.S. Bureau of Engraving and Printing. Printing quantities ranged from a low of 372,500 for the $1 black stamp to a high of 11,072,700 for the 15¢ blue stamp.

The Scott Specialized Catalogue of United States Stamps and Covers values the set in mint, never-hinged condition at $27.35.

This set is popular with American collectors and is a good buy in mint, never-hinged condition at around 90 percent of Scott catalog value.