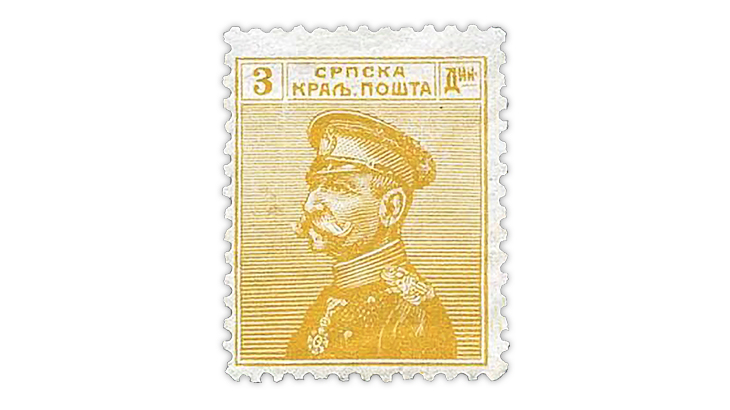 Serbia, a landlocked country in the Balkan Peninsula, shares borders with Hungary, Romania, Bulgaria, North Macedonia, Croatia, and Bosnia and Herzegovina. The independence of the breakaway Serbian province of Kosovo, which borders on Albania, has been recognized by the United States and approximately 100 other countries.

After the collapse of Yugoslavia in the Third Balkan War, Serbia and Montenegro began issuing stamps in 2003. Montenegro declared its independence in 2006, and Serbia resumed issuing its own stamps that year.

A truly scarce Serbian stamp is the 3-dinar olive yellow King Peter I Karageorge stamp (Scott 127). Printed by typography on thick wove paper and perforated gauge 11½, the stamp was issued in 1914, the first year of World War I.

As Serbia was fighting for its existence in the ensuing years against Austria-Hungary, Germany and Bulgaria, the stamp was not widely distributed and saw little use. We previously tipped this stamp in the July 24, 2006, issue of Linn’s.

The Scott Classic Specialized Catalogue of Stamps and Covers 1840 to 1940 values the stamp at $190 in unused, hinged condition and a whopping $1,750 in used condition. (The value for used is in italics, which generally refer to items that are difficult to value accurately.)

An example of this stamp without faults in unused, hinged condition is a good buy at full Scott catalog value. Centering is less crucial with this stamp as most available examples are in grades lower than very fine. Examples in very fine grade bring a premium.

Counterfeits exist, but most are yellow in color and have a more coarse, less detailed impression of the design.

If you are buying a stamp in used condition, expertization is a must to ensure in-period usage.