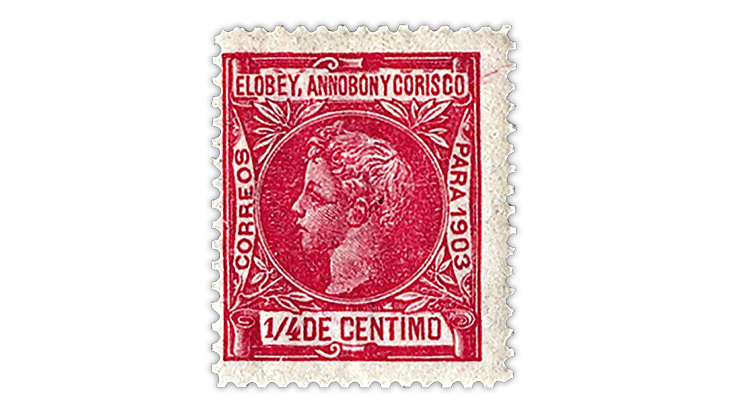 The 1903 Elobey, Annobon and Corisco set of 18 King Alfonso XIII definitive stamps (Scott 1-18) is in demand and selling for Scott catalog value or more in fine-very fine grade and unused hinged condition and mint never-hinged condition.

Spanish colonies are hot, especially for the more esoteric countries and issues. Elobey, Annobon and Corisco was a Spanish colony comprising four islands in the Gulf of Guinea off the west coast of Africa.

The islands, Elobey Grande, Elobey Chico, Annobon, and Corisco, have a total land area of about 23 square miles and a population of less than 4,000.

The colony issued stamps from 1903 to 1910. Its stamps were superseded by those of Spanish Guinea. Today the islands belong to Equatorial Guinea.

The first stamps for the colony were a set of 18 King Alfonso XIII definitive stamps (Scott 1-18) issued in 1903. The king was the posthumous son of his father and reigned from the moment of his birth in 1886. His mother ruled as his regent until his 16th birthday in 1902.

The juvenile portrait depicted on the stamps did not do much to enhance his authority or respect. He was forced to flee the country by the Spanish republicans in 1931. In 1941 he formally renounced the throne in favor of his son Juan. The Spanish monarchy was eventually reestablished in 1981.

The Scott Classic Specialized Catalogue of Stamps and Covers 1840-1940 values the first set of King Alfonso XIII definitive stamps (Scott 1-18) at $757 in unused hinged condition and $1,500 in mint never-hinged condition.

Centering for these and most Spanish colonial stamps of the period is usually atrocious. The best you can hope for is fine-very fine grade, and a complete set in that grade sells for Scott catalog value or more. If you can find the individual higher value stamps at or near catalog value, you can likely fill in the more common lower value stamps at less than catalog value.