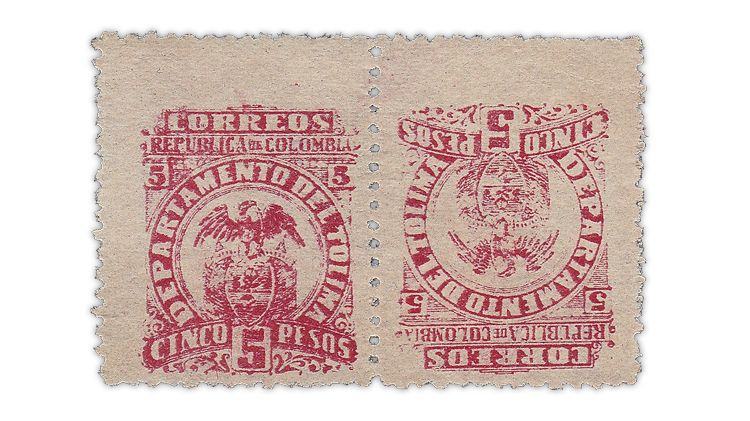 A Colombia – Tolima 1903 5-peso red Departmental Crest tete-beche pair (Scott 86a) in unused, hinged condition recently sold in an online auction for $76 against a Scott Classic Specialized Catalogue of Stamps and Covers 1840-1940 value of $16.

The United States of Colombia was founded in 1863. It comprised a federation of nine sovereign states: Antioquia, Bolivar, Boyaca, Cauca, Cundinamarca, Magdalena, Panama, Santander and Tolima.

Starting in the 1860s, all of these states except Cauca and Magdalena issued postage stamps.

In 1886 a new constitution was adopted that changed the name of the country to the Republic of Colombia. The states were stripped of most of their sovereign powers and became departments. However some continued to issue postage stamps until as late as 1904.

Panama, which previously had been independent from 1855 to 1863, seceded from Colombia and regained its independence in 1903.

Although they are rarely stocked and sold, Colombian states stamps have gained in popularity in recent years. Many have very inexpensive catalog values.

Market values for Colombian states stamps are complicated, with some selling for as little as 50 percent of Scott catalog value, while others sell for a good deal more than catalog value.

In 1903 the department of Tolima issued a series of eight stamps showing its departmental crest (Scott 79-87).

The stamps were issued with sewing machine perforations, with gauge 12 perforations, and imperforate. The 5-peso red stamp also exists as a tete-beche pair (Scott 86a).

The Scott Classic Specialized Catalogue of Stamps and Covers 1840-1940 values the tete-beche pair (two stamps joined together with one stamp being inverted in relation to the other) at $16 in unused, hinged condition and $24 in used condition.

A pair in unused, hinged condition recently sold for $76 in an online auction. It is hard to know if $76 is the true market value of this pair as two bidders fought over it in a bidding war. Regardless, it is certainly a scarce variety and worth well more than Scott catalog value.