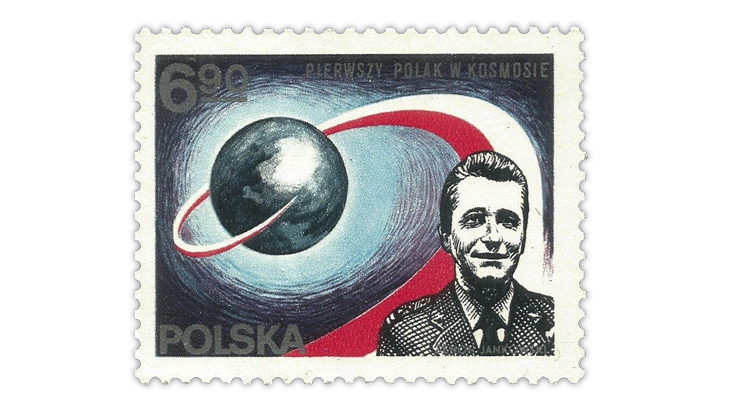 Soyuz 30, which docked with the Salyut 6 space station June 29, 1978, was the only Soviet or Russian space mission crewed by a Polish cosmonaut. The other member of the crew was Belarusian cosmonaut Pyotr Klimuk. Major, later colonel, Zenon Jankowski trained as a backup cosmonaut to Hermaszewski in case he was unable to fly on the mission.

Jankowski, born in Poznan, Poland, on Nov. 22, 1937, is still living. Polish postal authorities prepared a 6.90z Maj. Zenon Jankowski stamp, evidently in case he actually flew on the mission, but the stamp was not issued. Some examples of the unissued stamp have found their way into the stamp market.

The unissued stamp is noted but not listed or valued in the Scott Standard catalog.

There is demand for this stamp from collectors of Polish stamps as well as space topical collectors. Recent realizations on the online auction site eBay range from about $125 to about $325. The unissued stamp is a good buy in mint never-hinged condition in the $125 to $175 price range.