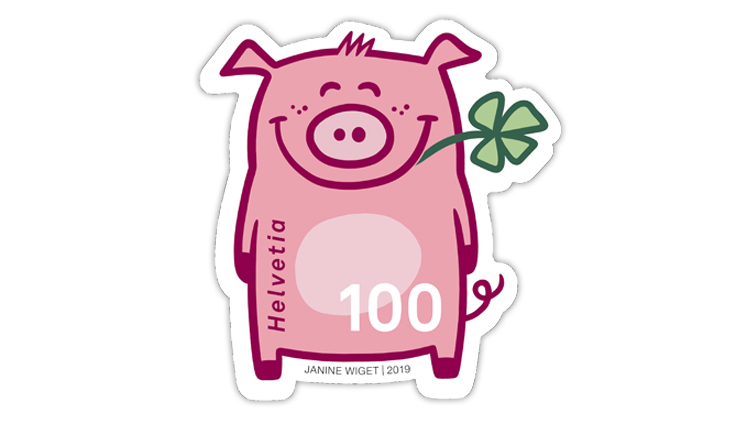 Switzerland’s Lucky Pig stamp is shaped like a pig and printed on flocked paper that is soft to the touch. 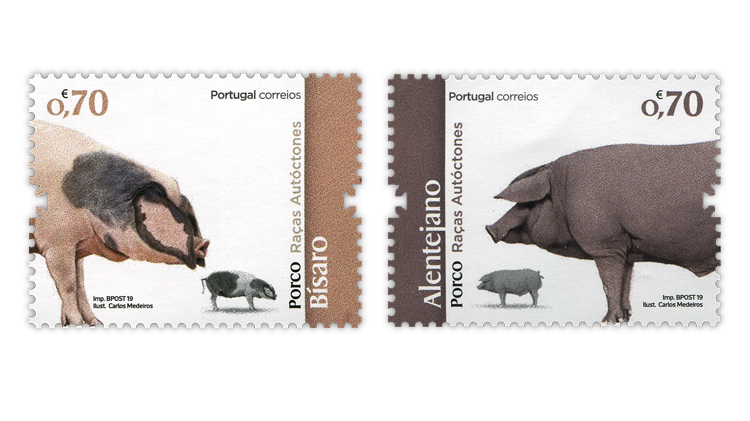 Two pig breeds, the bisaro and Alentejo, are represented on 0.70 stamps issued earlier this year in the Portuguese Autochthonous Breeds series. 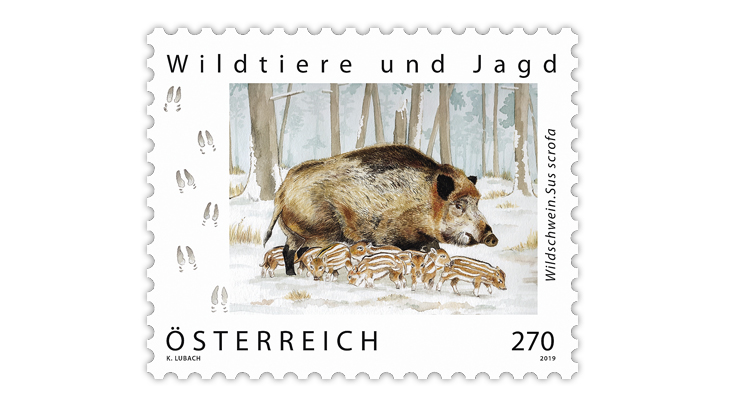 The last stamp in Austria’s Wild Animals and Hunting series features the wild boar. A sow and piglets are shown. 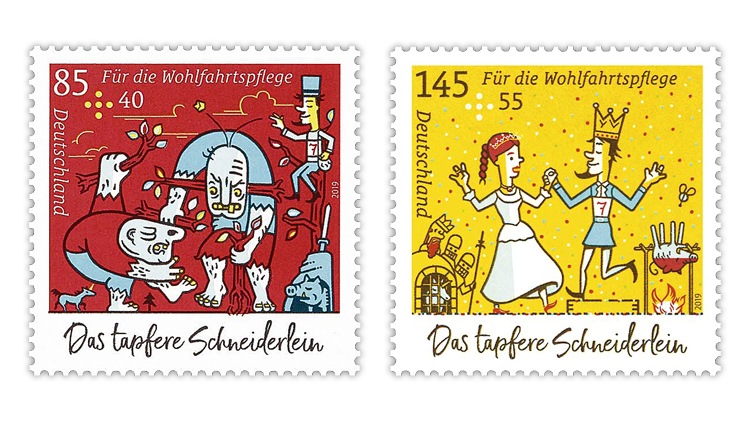 The wild boar meets an unfortunate fate in the Grimm Brothers fairy tale The Brave Little Tailor. The boar is shown in the lower right on these German Welfare semipostal stamps issued Feb. 7, part of a set of three. 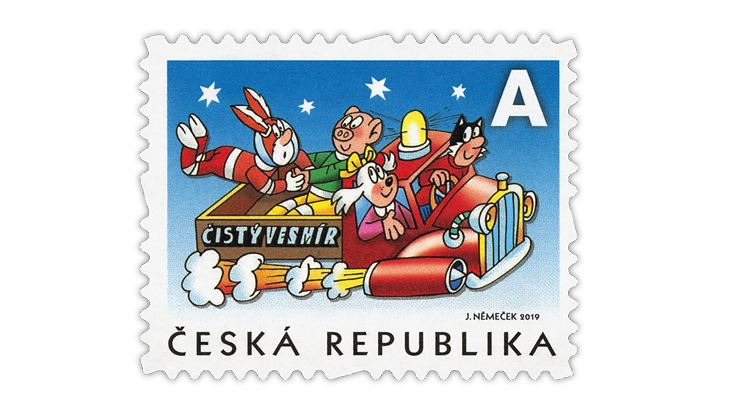 Bobik the pig, a character in the comic book series Ctyrlistek, is pictured riding in the back of a truck in the design of this definitive stamp issued May 22 by the Czech Republic.
Previous
Next

A recent stamp from Switzerland celebrates the pig as a symbol of good luck.

Not only does this stamp show a happy pig, but it is also shaped like one. To add to the good luck theme, the pig is chewing on a four-leaf clover.

Also, this Lucky Pig (Glucksschwein in German) stamp is soft to the touch. In announcing the stamp, Swiss Post said, “To achieve this softness, the stamp had to be ‘flocked’ using a special method.”

Swiss Post further explained that the stamp paper “first had to be sprinkled with soft particles before being printed. This is why these stamps took three whole months to be completed.”

Joh. Enschede of the Netherlands printed the stamp by offset lithography in sheets of 10. Janine Wiget designed it, and her name appears below the “100” centimes (1-franc) denomination at the bottom of the design.

A few other countries also have issued porcine-related stamps early in 2019 that have nothing to do with the Year of the Pig. For example, two pig stamps are included in the Portuguese Autochthonous Breeds set issued Jan. 28

One of the two €0.70 stamps highlights Portugal’s native bisaro pig. In its new-issue announcement, Portugal’s CTT describes the bisaro as a docile breed of large pigs (up to 3 feet tall and 5 feet long) with black, white or spotted coats.

The other stamp shows the Alentejo pig, a dark black pig with thick bristles, a small head and triangular ears.

Shown on the other four stamps in this set are the Serra da Estrela sheep, Portuguese speckled hen, Alentejo cow and Miranda donkey, respectively.

The stamps were issued in sheets of 50 and in a souvenir sheet with the six designs se-tenant (side-by-side).

Like Portugal’s stamps, other recent pig stamps are part of existing series.

Each stamp in the series features a different animal and includes paw or hoof prints on the left side of the design. In addition to these prints, the Wild Boar stamp shows a sow and her piglets. Joh. Enschede printed the stamp in sheets of 50.

The pigs are almost hidden in the designs of two recent German semipostals.

Known as Welfare semipostals, the surtax on these stamps go to the Federal Association of Non-statutory Welfare (Bundesarbeitsgemeinschaft der Freien Wohlfahrtspflege), which describes itself as the collective voice of the six nonstatutory welfare umbrella organizations in Germany.

Since 2014 (Scott B1085-B1088), these semipostals have illustrated fairy tales by the Brothers Grimm (Jakob and Wilhelm). The set of three semipostals in this series issued Feb. 7 illustrates scenes from The Brave Little Tailor.

The 0.85+0.40 stamp shows the two giants tearing up trees. A wild boar is depicted in the lower right. In this tale, if the tailor captures this boar, the king promises to give him half his kingdom and his daughter’s hand in marriage.

The 1.45+0.55 semipostal stamp features the wedding scene. This time the boar is being roasted on a spit.

Michael Kunter designed these semipostals. Bundesdruckerei printed them in separate panes of 10 and in a booklet with the three designs.

The Czech Republic introduced a definitive stamp series in 2010 based on the Ctyrlistek series of comic books created by Jaroslav Nemecek in 1969 (Scott 3450). The pig Bobík, one of the main characters, has been depicted on some of these stamps, including the two just issued on May 22.

The two self-adhesive stamps are sold together in a booklet of 10 (five of each design).