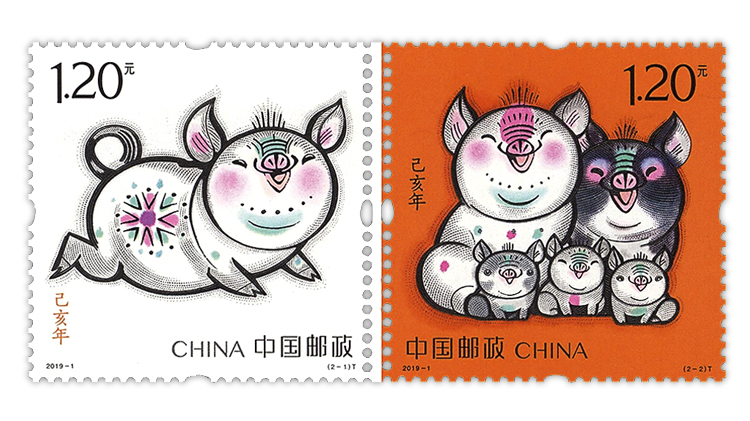 Figure 1. China received an honorary award in the Year of the Pig contest for stamps from other countries and Chinese administrative regions. 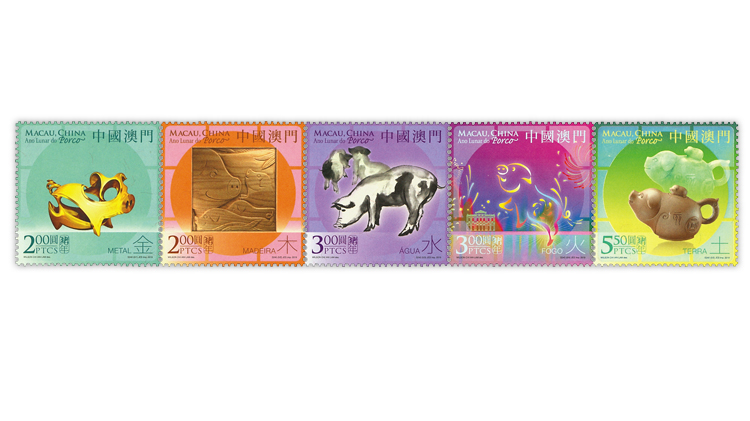 Figure 2. Macau won the competition for the best Year of the Pig stamps with its five stamps and souvenir sheet issued Jan. 5, 2019. The stamp designs also represent the five elements: metal, wood, water, air and earth. 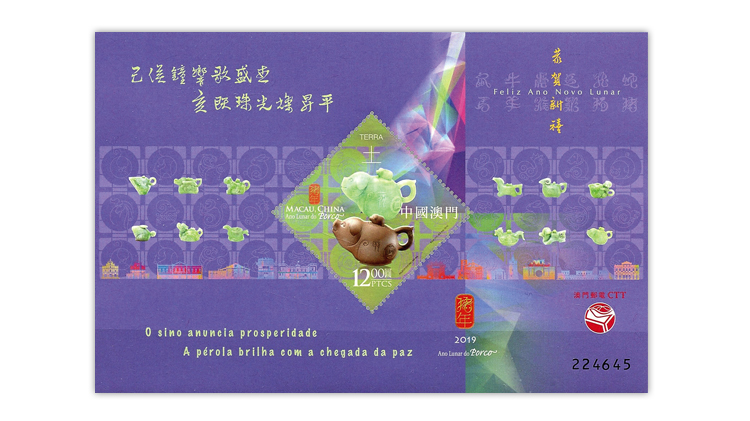 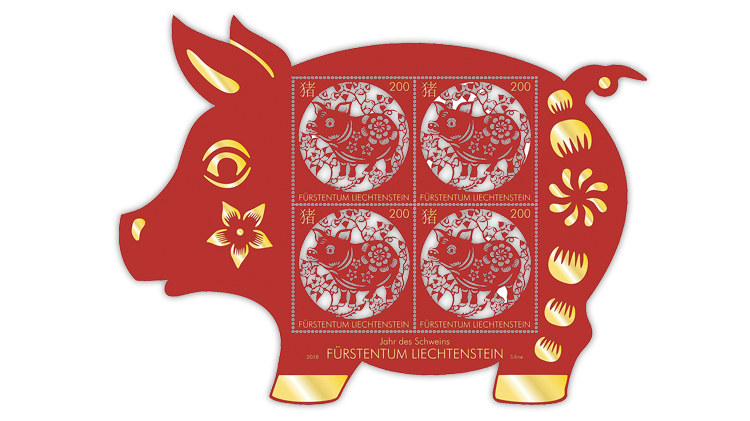 Figure 4. Liechtenstein’s Year of the Pig stamp, designed as a delicate paper cut and produced using ultramodern laser, was sold in a pig-shaped pane of four. The stamp placed second in the poll. 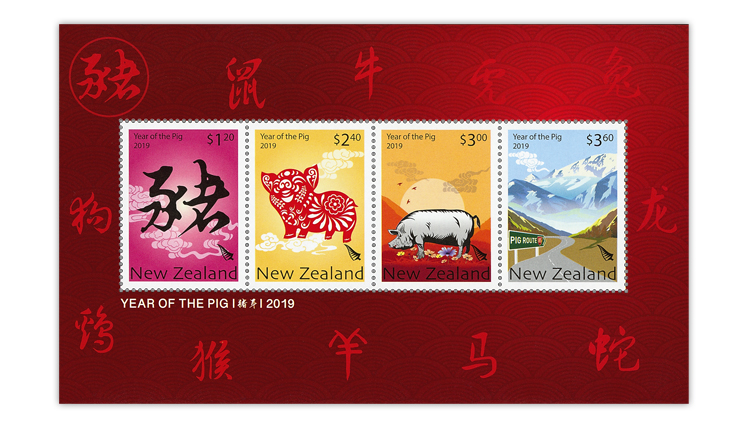 Figure 5. New Zealand, which finished in third place, issued a four-stamp souvenir sheet on Jan. 19, 2019, to celebrate the Year of the Pig. 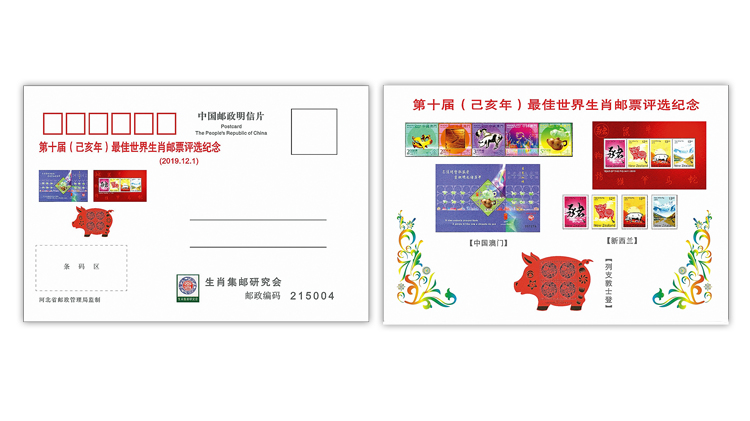 Figure 6. The front and back of the Chinese Shengxiao Philatelic Society’s postcard picturing the three top Year of the Pig issues from 2018.
Previous
Next

Stamps from Macau, Liechtenstein and New Zealand won a competition for the best Year of the Pig stamps.

This was the first time Macau took the top honor. Liechtenstein and New Zealand have placed second and third, respectively, for three years in a row.

The Chinese New Year, also known as the Lunar New Year, follows a 12-year cycle with each year associated with one of the zodiac signs. The pig is the 12th sign of the cycle.

People born in the Year of the Pig are believed to be straightforward, kindhearted and generous. They are said to enjoy spending time and sharing things with others, generally relaxed, easy on themselves and often romantic. They also are known for being calm under pressure as well as curious by nature.

As with the competitions held in 2014 to 2018, voting in the Year of the Pig competition was only open to the members of the Chinese Shengxiao Philatelic Society and not to other stamp collectors.

The winning stamps were selected by these members and a jury of 27 experts. Voting took place from Sept. 15 to Oct. 20, 2019. The members and experts were asked to select no more than three best Year of the Pig stamps.

This Year of the Pig issue is the fourth set in the fourth series of Lunar New Year stamps of China. The theme for the fourth round of zodiac stamps is “happy family.”

One stamp shows a pudgy pig running, symbolizing striving towards a better life. This stamp is called “Pig Brings You Blessings.”

The second one, called “Five Blessings Gathering,” reflects the concept of family happiness and expresses wishes for a happy new year.

Also on the left side of each stamp are three Chinese characters, “Ji Hai Nian,” which mean 2019 in the Chinese calendar.

The stamps were issued in panes of 16 with oracle bone inscriptions in the selvage.

Han Meilin, an 83-year-old artist and professor at Tsinghua University, designed the stamps. He is most recognized for his creation of the fuwa (good luck) dolls for the 2008 Beijing Summer Olympics.

Han was arrested during the Cultural Revolution for befriending foreigners, among other so-called crimes, for which he spent five years in prison.

After he was released in 1972, he devoted his time to creating beautiful drawings and sculptures of animals. He designed his first stamp for the Year of Pig in 1983 (People’s Republic of China Scott 1832) and also designed the Year of the Rooster stamps of 2017 (4425-4426).

Since the inception of China’s Lunar New Year stamps in 1980, around 30 artists have designed the stamps, with some like Han having the honor of designing more than one issue.

Macau became a special administrative region of China on Dec. 20, 1999, after 442 years of Portuguese rule. At that time, the country name on the stamps changed from “Macau” to “Macau, China.”

The third series started with the Year of the Rat issue of 2008 (Scott 1239), and like all of the following sets in the series, this issue included five se-tenant (side-by-side) stamps and one souvenir sheet.

The philatelic department of Macau’s CTT said of the issue: “The conceptual design of the stamps is combined with the different forms of the pig and the distinguishing characteristics of ‘Metal, Wood, Water, Fire and Earth.’ ”

These characteristics also are known as wu xing, the five elements, five movements, five phrases and the five steps.

Since the pig’s nature from the five elements is “earth pig” in 2019, which happens once every 60 years (five 12-year cycles), it was the main character of the five stamps.

The 5-pataca Earth Pig stamp is on the far right in the strip of five shown in Figure 2. Macau combined embossed foil with a holographic application to highlight the images of the pig-shaped purple clay and carved jade teapots in the design.

From left to right, the designs of the other four stamps represent metal (2p), wood (2p), water (3p) and fire (3p), respectively.

Figure 3 shows Macau’s Year of the Pig souvenir sheet, which includes a single 12p stamp featuring the purple clay and jade teapots from the design of the 5p Earth Pig stamp. However, the background is different, and the stamp in the souvenir sheet is diamond-shaped.

A couplet inscribed on this souvenir sheet translates to “The bell tolls to announce prosperity./The pearl shines with the arrival of peace.”

In its press release announcing the stamps, Macau’s philatelic department said, “The bell tolls to announce prosperity of the Year of the Pig while the glow of the pearl welcomes the tranquility brought by this year.”

Macau’s Lunar New Year stamps came in fourth place in 2014 and 2018 for the Year of the Horse and the Year of the Dog, respectively, but never reached the top three. In this year’s competition, Macau finally won first place.

The press release about the contest commented on Macau’s unusual approach of representing the five Chinese elements and celebrating the shining new year on its Year of the Pig stamps and souvenir sheet.

Liechtenstein issued its eighth Chinese zodiac stamp Nov. 12, 2018, to celebrate the Year of the Pig.

The 2-franc self-adhesive stamp was designed as a delicate paper cut and produced using ultramodern laser technology. The pane of four stamps is red, a color that symbolizes luck in China, and is also cut in the shape of a pig, as shown in Figure 4. All the imprints were applied in high-quality gold foil embossing.

If you put the stamp on the white paper, you can see the white background through the holes.

Liechtenstein also issued 600 press sheets that include four pig-shaped panes. Among other things, the Chinese sign of the zodiac is a symbol of luck and success.

Stefan Erne has designed all eight of Liechtenstein’s Chinese zodiac stamps. Also, these eight issues were welcomed by Chinese stamp collectors, because all of them have placed in the top four in the competitions: first place in the 2016 for the Year of the Monkey contest; second place in 2014, 2017, 2018 and 2019 for the horse, rooster, dog and pig contests; third place in 2012 and 2015 for the dragon and ram; and fourth place in 2013 for the Year of the Snake.

The stamps celebrate the multicultural nature of New Zealand. The designs were inspired by Chinese folk arts as well as Maori and Pacific design patterns. For example, the cloud pattern that appears on all four stamps is a metaphor for good luck in Chinese and for “the land of the long white cloud” according to the indigenous Maori of New Zealand.

This cloud pattern has been included on all of New Zealand’s Lunar New Year stamps since the 2009 Year of the Ox issue.

In the Year of the Pig set, the $1.20 stamp features the Chinese calligraphy for “pig.” This art form has been a key part of Chinese culture for centuries and continues to have an essential role in Chinese New Year celebrations today.

The $2.40 stamp shows an image of a pig created by paper-cutting, a 1,500-year-old form of Chinese folk art in which people and animals of folk tales and legends are recreated in a variety of shapes, sizes and colors, according to New Zealand Post.

An Arapawa pig is illustrated in line art on the $3 stamp. New Zealand Post said, “The origins of the rare Arapawa pig are clouded in mystery, but it’s said that explorer Captain James Cook introduced them to New Zealand’s Arapaoa Island (in the Marlborough Sounds) when he visited almost 250 years ago.”

The $3.60 stamp focuses on State Highway 85. This main route from Alexandra to Central Otago on the South Island is also known as the “Pig Route.” According to New Zealand Post, “One of the popular stories behind the name dates back to the goldrush of the 1880s when, it’s said, wild pigs would approach the miners’ horses and rub noses with them.”

Included in the selvage of the souvenir sheet are Chinese calligraphic inscriptions of the 12 zodiac animals. The calligraphy for the Year of the Pig is in the upper left in a circle.

The press release about the competition said that New Zealand’s Year of the Pig stamps continue the style of reflecting the culture link between China and New Zealand.

The competition committee printed a postcard picturing the three top Year of the Pig issues, shown front and back in Figure 6. Everyone who voted in the contest whose selections matched the top three received this postcard Dec. 1 signed by the president of the Chinese Shengxiao Philatelic Society, Zhou Zhi-hua.