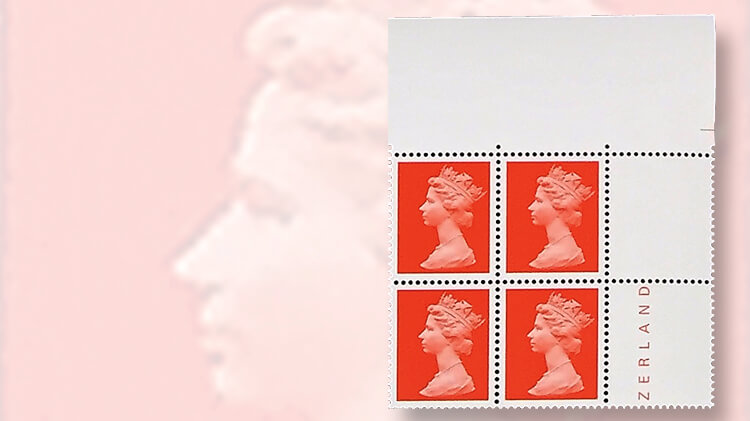 Trial-color printings of Great Britain’s famous Machin-head definitive stamp were conducted in 1997. Shown is a block of four cropped from one of the 100-stamp panes; it is in a color called flame. Two other trial colors were printed: deep green and light

Daniel F. Kelleher Auctions in Danbury, Conn., is representing the owner of the trial-color panes.

“We represent a private owner,” said Rick Penko, production manager for the Kelleher firm. “He has not put forth plans for sale.”

Introduced in 1967, the Machin definitives were first printed using lithography in 1980, when Royal Mail expanded its range of suppliers.

By the mid-1990s, Royal Mail had decided that all its standard definitives should be gravure-printed. The then current printer, the House of Questa, based in South London, did not have gravure capability.

Thus, Royal Mail was authorized to approach Helio Courvoisier SA of Switzerland (noted for the high quality of its photogravure work), probably with a view to subcontracting the gravure printing.

The fully finished, perforated and gummed nondenominated trials were undertaken on Oct. 20, 1997, in sheets of 200, and then trimmed into panes of 100 with the Courvoisier imprint along the vertical margins.

Using its work on the 1993-99 Birds definitives of Kenya, Courvoisier printed these trials on coated paper without phosphor bands. Perforated gauge 15 by 14, the familar stamp image is slightly smaller than that of the Machin definitives in use at the time.

A set of the panes is being donated to the Postal Museum in London, courtesy of Allan Grant of Rushstamps.