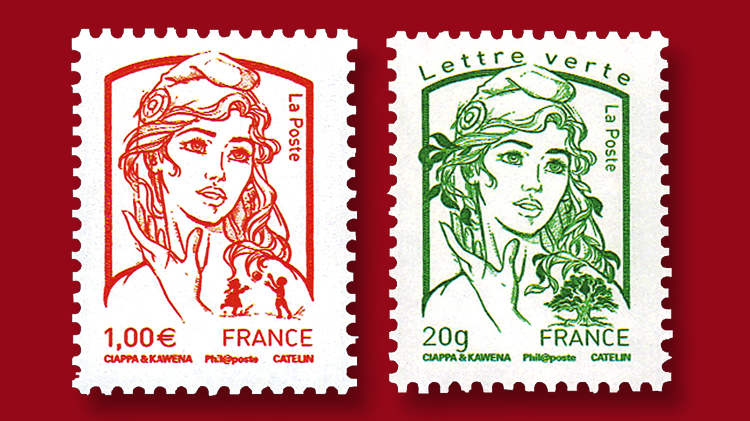 The Marianne and Youth definitives introduced in 2013 show a youthful Marianne with two children playing ball. Shown here is the denominated 1.00€ stamp (Scott 4418). Stamps for the environmentally-friendly green rate have leaves in Marianne’s hair and a

The Dec. 17 monthly issue of Linn’s Stamp News just landed on the presses and goes in the mail to subscribers Monday, Dec. 3. And if you subscribe to Linn’s digital edition, you’re at the head of the line with early access Saturday, Dec. 1. Here are three stories you'll want to check out.

Marianne and Youth stamps thrived for their expected five years

The Marianne and Youth definitives introduced in 2013 show a youthful Marianne with two children playing ball. In the Philately of France column, Larry Rosenblum reports the success of the recently concluded series was driven by technology and postal rate changes. Special issues for collectors added to the interest.

In the Great Britain Philately column, Matthew Healey shares an intriguing tweet about stamps showing children playing in snow and how to begin a nice topical collection.

The Scinde Dawks had the distinction of being the first postage stamps of Asia and the first issued in the British Empire outside of Britain. Columnist Sergio Sismondo takes a look at this riveting chapter of philatelic history in Unveiling Classic Stamps.